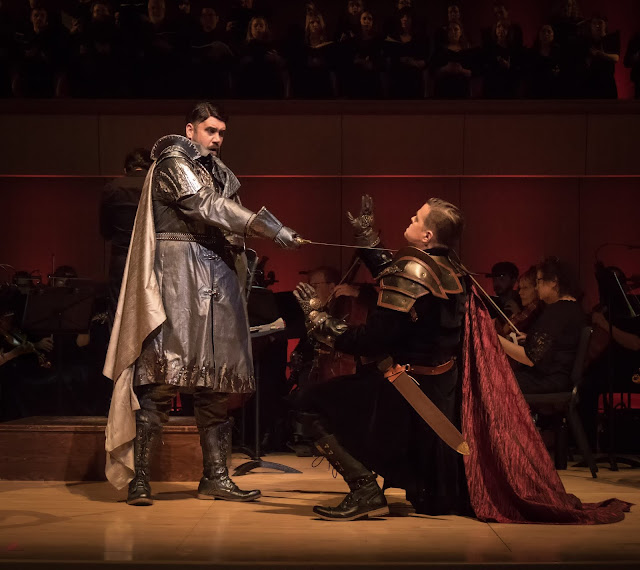 Hear how I reward the forbidden question!
I was sent to you by the Grail:
my father Parzival wears its crown,
I, its knight, am called Lohengrin.


For its spring production, Opera Southwest (Albuquerque's regional opera company) selected Richard Wagner's "Lohengrin."  It's the story of a medieval knight of the Holy Grail who, incognito, comes to the rescue of a woman falsely accused of drowning her younger brother, heir to a duchy.  The linchpin of the plot is Lohengrin's insistence that his true identity must remain unasked and unknown (prefiguring The Lone Ranger, I guess).

"Lohengrin" is not on the same scale as Wagner's magnum opus, Der Ring des Nibelungen (the Ring cycle), but clocking in at over three hours, it's still a challenging work for a small opera company.

And beyond the artistic challenges, Opera Southwest had more than its share of production challenges to overcome.

First, about a month ahead of the premiere, the female lead bailed out.  To find a quality singer on such short notice for such a major role was an enormous challenge, but with the help of Maestro Anthony Barrese they enlisted Michelle Johnson, 2005 graduate of the New England Conservatory and a 2011 winner of the Metropolitan Opera National Council Auditions.  She had never sung the role before, but learned it in less than a month and was radiant. 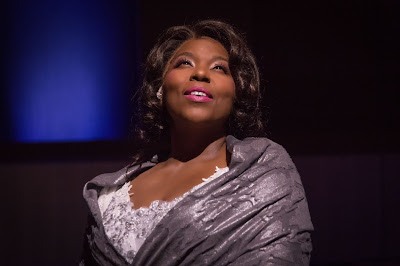 Corey Bix, making his role debut as Lohengrin, earned his Master of Music degree from the New England Conservatory, so he knew Michelle from their Boston days. 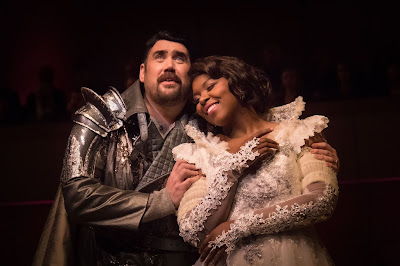 But replacing the lead female singer was just the beginning.  The OSW production became even more challenging when its home performance venue -- the Journal Theatre at Albuquerque's National Hispanic Cultural Center -- was damaged by fire and rendered unusable less than three weeks before opening night.

But OSW rose to the challenge.  Management and volunteers immediately swung into action to find alternative rehearsal space for the singers and the orchestra, as well as a venue that could accommodate their production and their sizeable audience.

The only usable venue that was available on such short notice was the Concert Hall at Cleveland High School in Rio Rancho, a very large suburb of Albuquerque.  The Concert Hall is gorgeous . . . 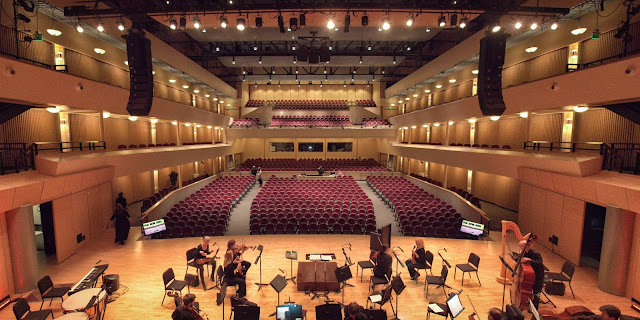 So . . . no orchestra pit, no fly for curtains, no wings for scenery, limited lighting options . . . which meant (a) putting the orchestra on the stage with the conductor with his back to the singers; (b) leaving about 10-12 feet for the singers between the orchestra and the edge of the stage; (c) no room on stage for chorus or supernumeraries; and (d) making do with simple lighting, no scenery, and minimal props.  Most significantly, with only a narrow strip at the front of the stage for action, the stage director, Loren Meeker, had to completely re-conceive the staging.

But the show must go on, and everyone stepped up magnificently to bring the production to life in an unfamiliar and physically limited venue.  Bravo, brava to all!

The staging and lighting arrangements created challenges for me as a photographer, too.  Most notable was the presence of the orchestra immediately behind the singers.  Faces, arms, hands, ankles, bows, sheet music, reading lights, reflections off shiny cello bodies, the conductor, the conductor's hands, the conductor's baton, the "Exit" signs in the balcony, and other things became visual distractions in almost every shot.

Here's what I mean.  All the circled items will be, to the viewer of the image, visual distractions.

So an image with the singers would be filled with what I consider to be distractions . . . like this: 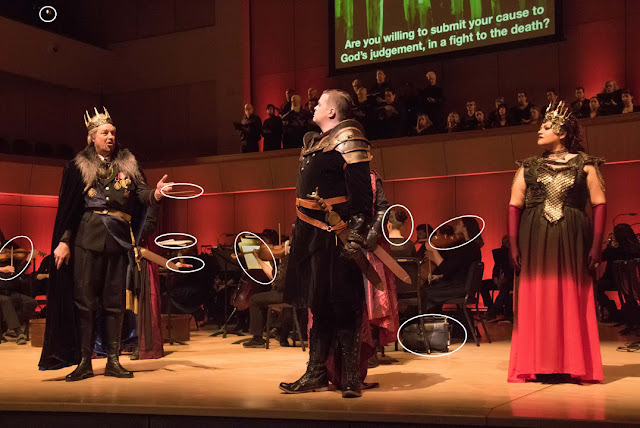 In real time, these things aren't much of a problem because our human visual system includes not just the eyes as passive receptors but also the brain which allows us to ignore the distractions and focus on whatever we think are the most important elements of the scene.

But the camera doesn't have selective vision like we do:  it "sees" and records everything in the scene.  As a result, images can be littered with distracting elements, as you can see from the images above.

How to deal with all that as a photographer?

For the most part, my strategy was to shoot tight -- i.e., close-ups -- as much as possible, leaving the distractions out of the frame. 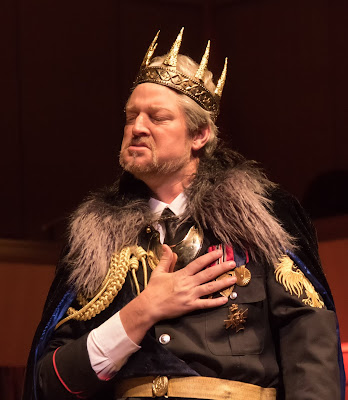 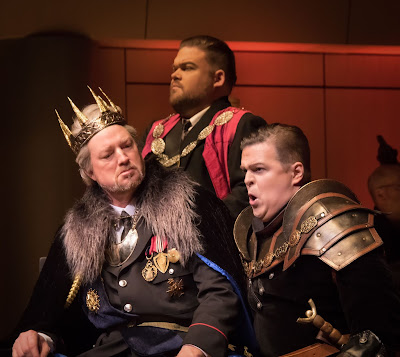 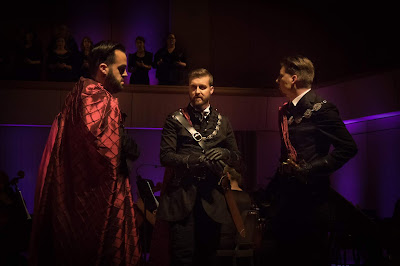 Other strategies included shooting from the side of the stage, rather than head-on: 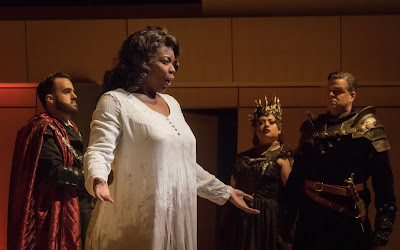 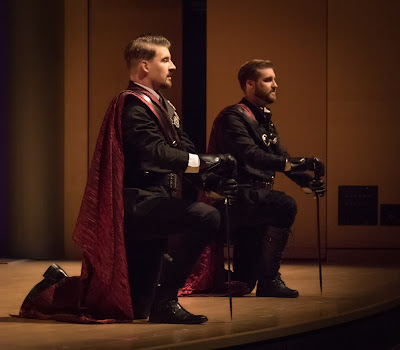 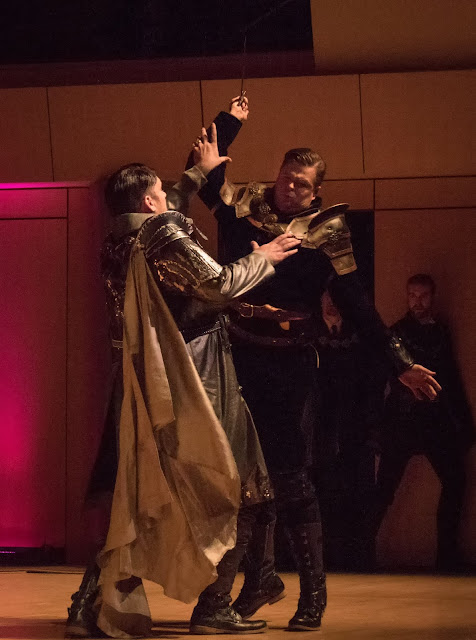 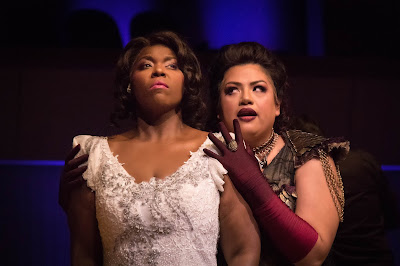 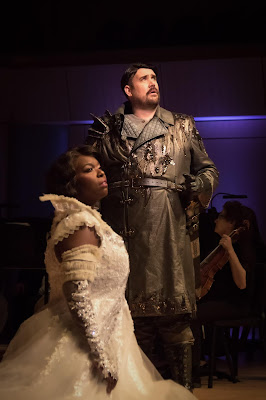 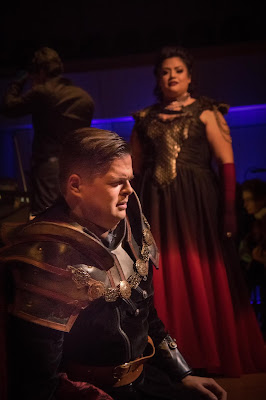 Occasionally I could make the presence of the conductor work as part of the composition of the image: 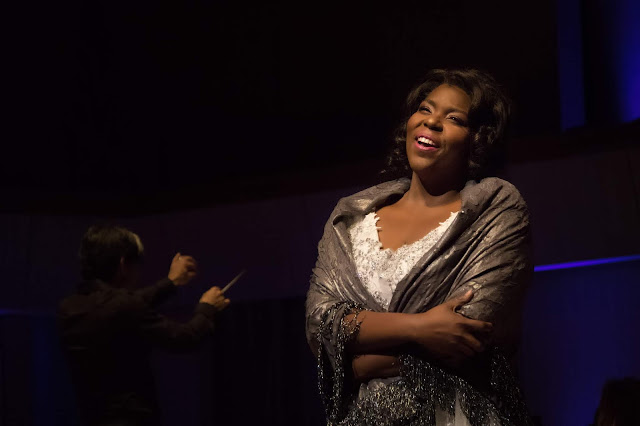 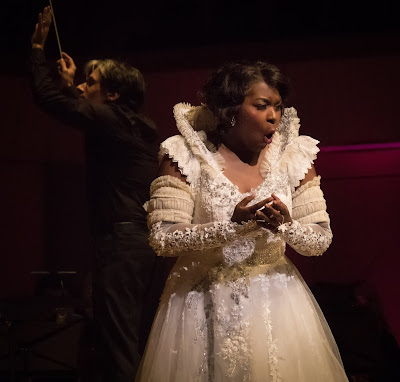 But when the singers were spread out across the stage, there was just no way to avoid the orchestra in the background.

In those cases, I worked in post-processing to erase or darken as many distractions as possible.

If you would like to see these images -- and all the other images from the complete opera -- please visit my photography website, Todos Juntos Photography, by clicking here.