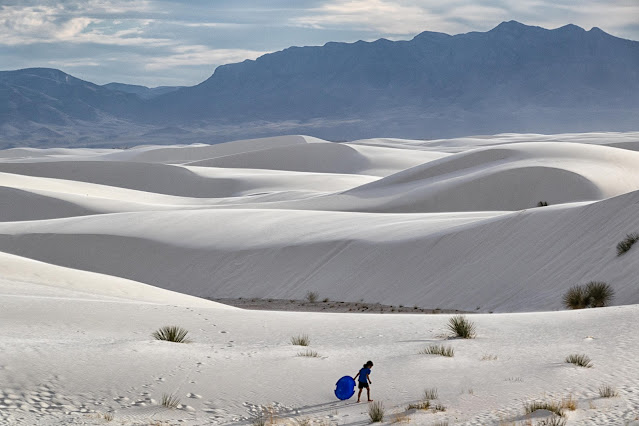 My photo buddy, Alan, and I took a trip to White Sands National Park last month in hopes of catching an early-morning full moon setting over the dunes.  (Spoiler Alert:  We didn't get the shot.  Clouds completely covered the moon as it set.  But I got some amazing images anyway - read on!)

It had been nearly seven years since I had been to White Sands, and since then the park got upgraded from National Monument to National Park status in 2019.  You can read about my 2015 visit by clicking here.

Because White Sands is about 240 miles from our home base in Corrales, NM, we decided to splurge (and make it easy on ourselves) by spending two nights in Alamogordo, NM, just 13 miles up the road from White Sands NP, rather than cramming everything into a 36-hour period.

So our first day was purely a travel day, and on the way we played tourist at the Valley of Fires lava flow, one of the youngest lava flows in the continental United States (approximately 5,000 years old).  The flow is located in the Tularosa Basin, about 4 miles west of U.S. highway 54 near Carrizozo, NM.  It's 44 miles long, 4 to 6 miles wide, 160 feet deep in places, and covers 125 square miles.

Here's an aerial view, courtesy of the New Mexico Museum of Natural History and Science: 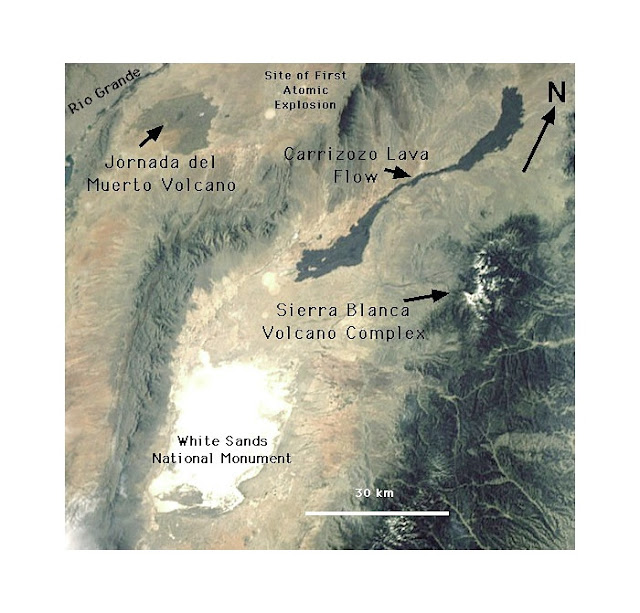 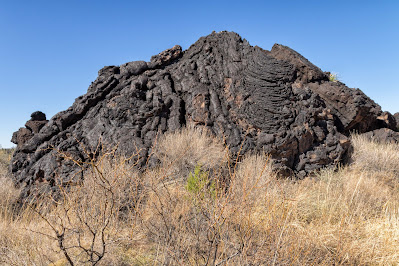 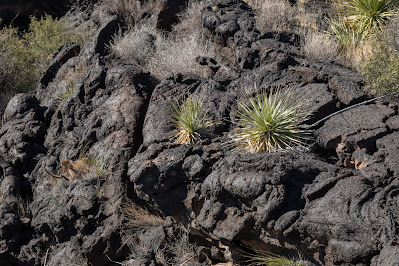 The next morning, we headed for White Sands to scout out possible good vantage points for the moonset the following morning.  We spent a few hours slogging up and down the dunes along the Alkali Flats trail. 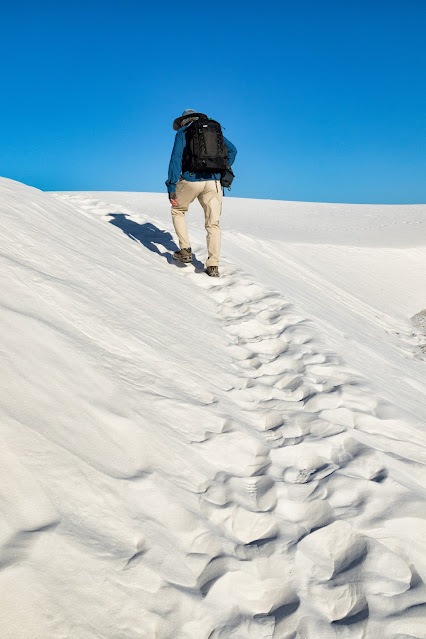 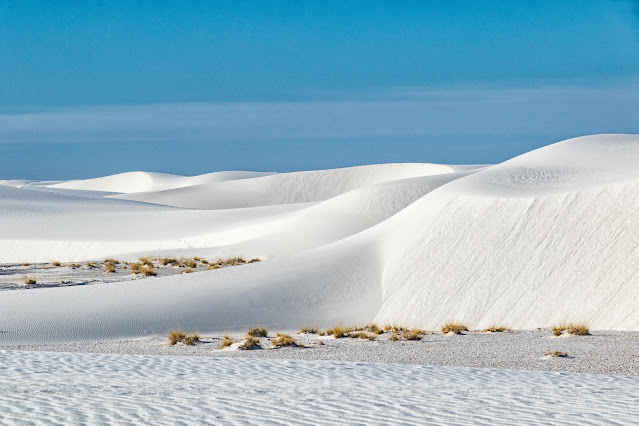 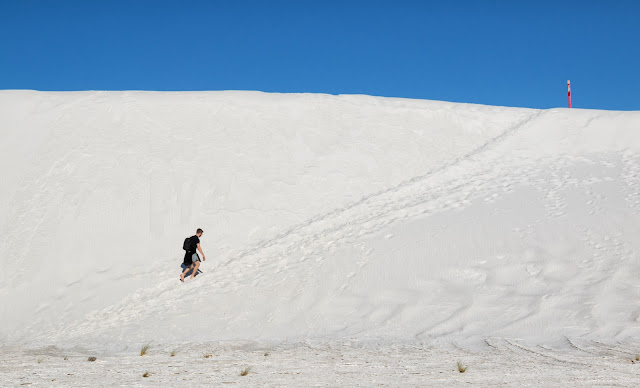 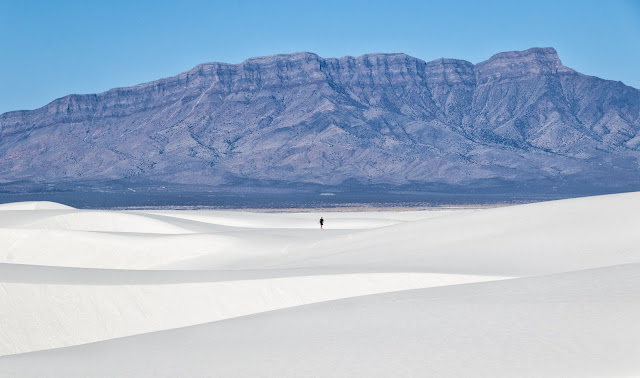 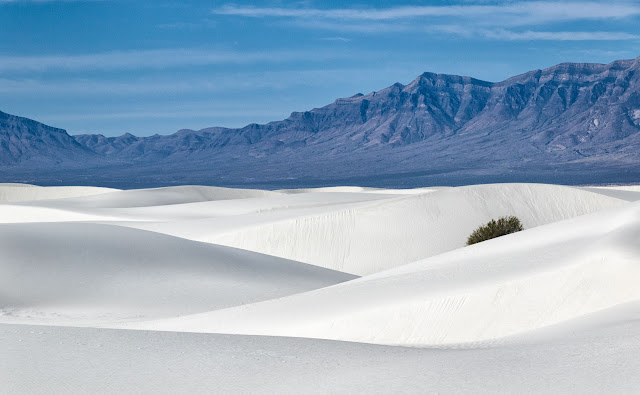 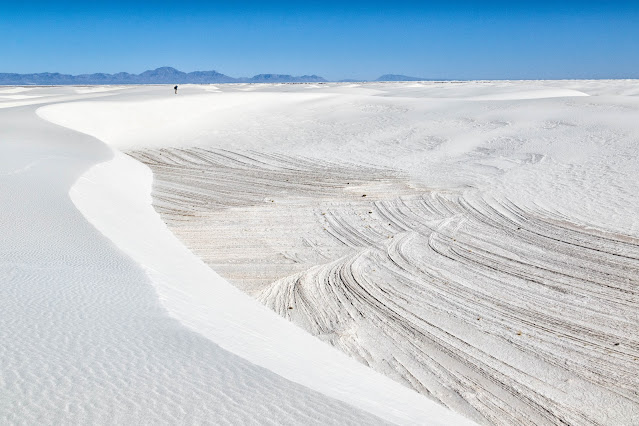 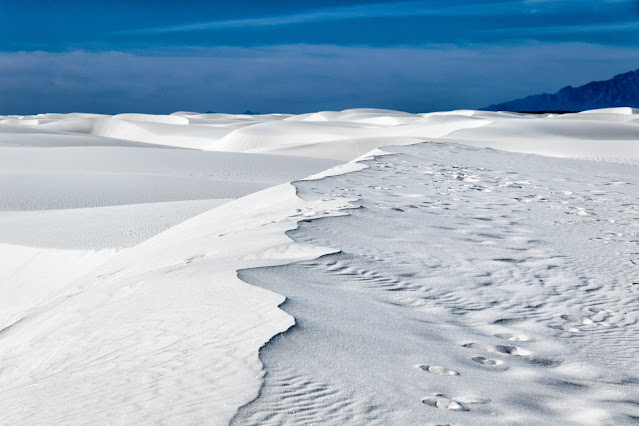 There's no shade out in the dune fields, and it's dangerous to hike if the temperature is above 85℉ . . . 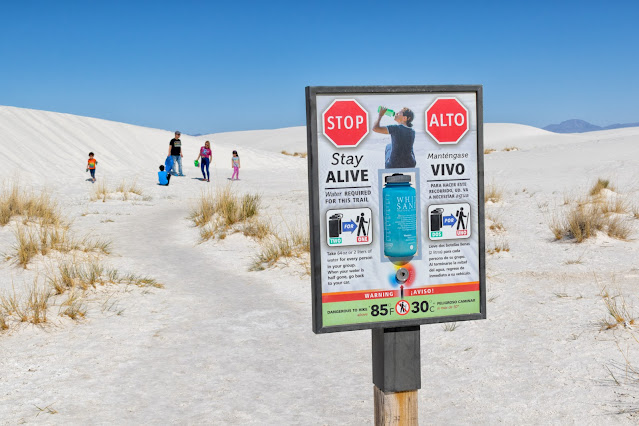 . . . but there are hundreds of people out there, even in the middle of the day. 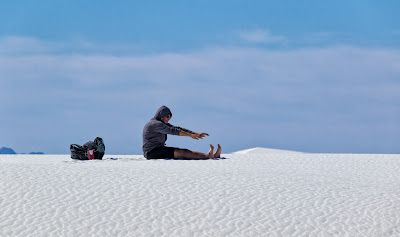 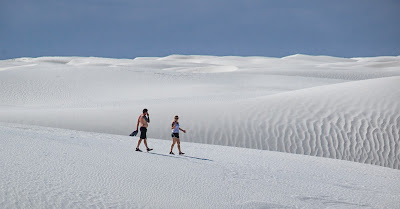 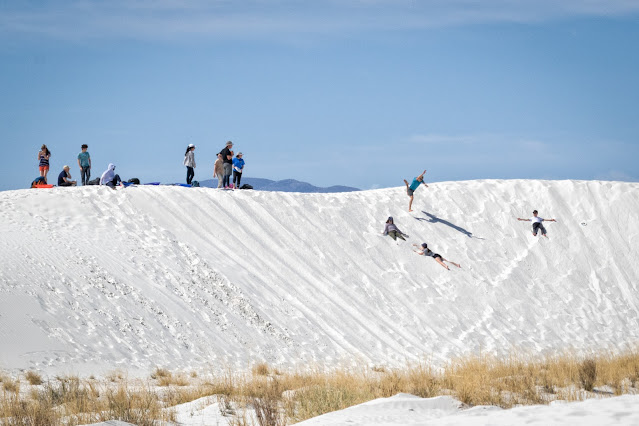 We hiked back to the car and left about 10:45am.  Our plan was to return late in the afternoon to photograph sunset and moonrise.

Moonrise was at 6:42pm and sunset was at 7:35pm, and by the time we arrived around 5:30, the sky was mostly cloudy and the wind was blowing steadily about 25 mph -- so there was blowing sand everywhere. 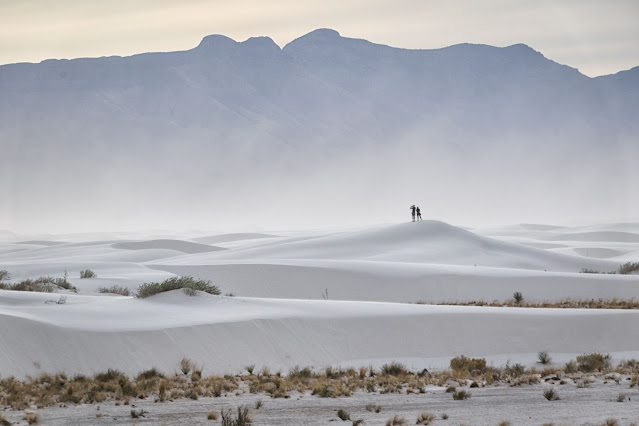 But the combination of the blowing sand and the light made for some wonderful photo opportunities: 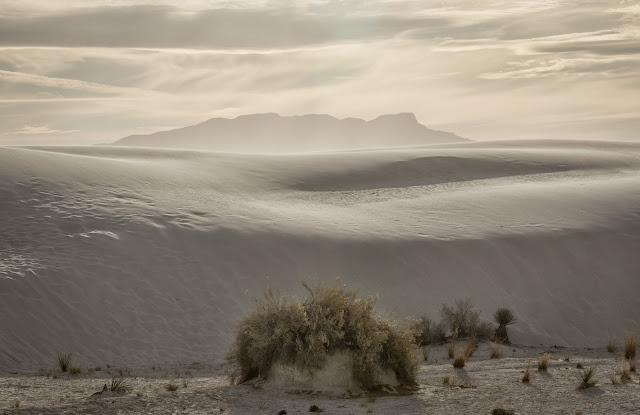 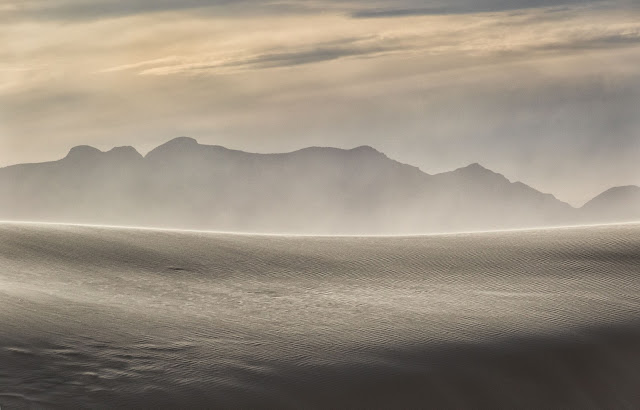 We did catch the moonrise, but weren't in a great position for dunes in the foreground -- best views in the park look west. 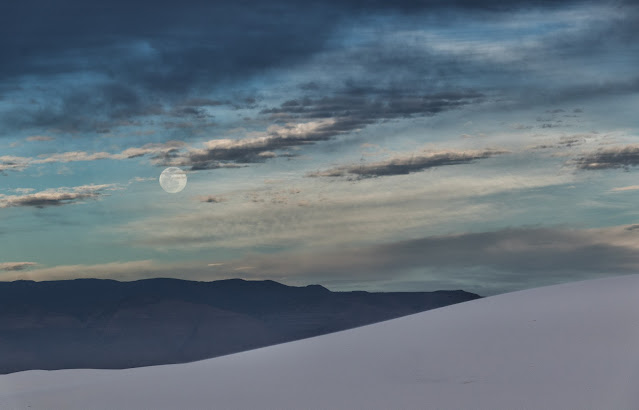 As you can see from the image above and the one below, the clouds were dominant from east to west . . . 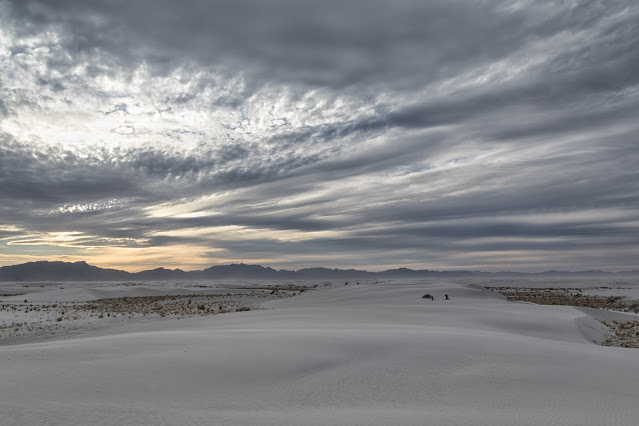 but as the sun set there were moments when the sun would break through, and that's when the photo opportunities really began.  First, a couple of "golden hour" images: 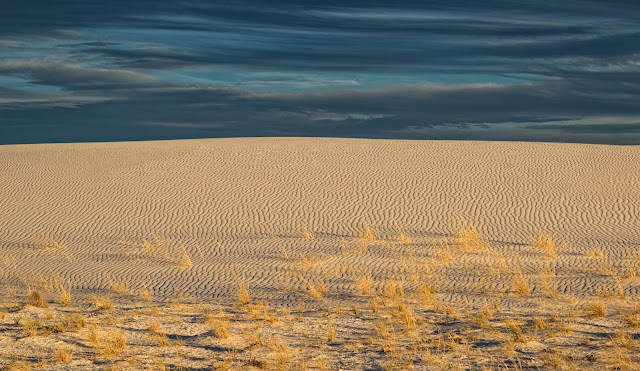 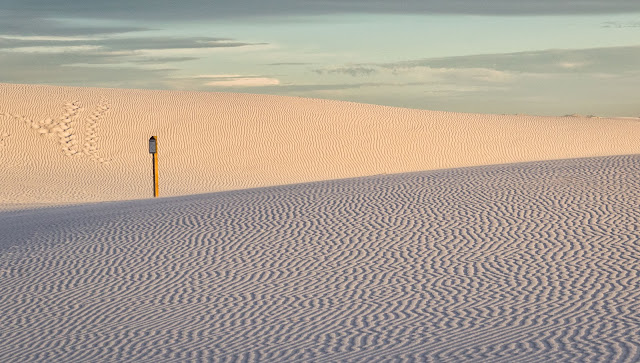 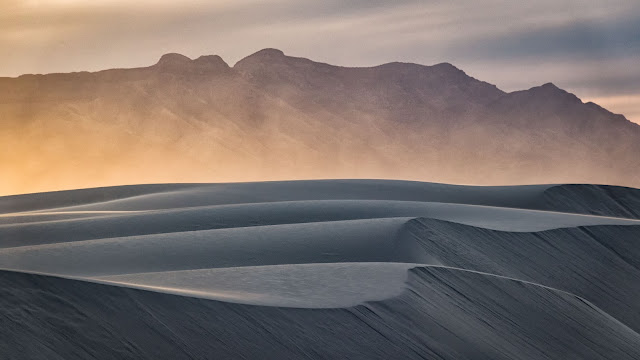 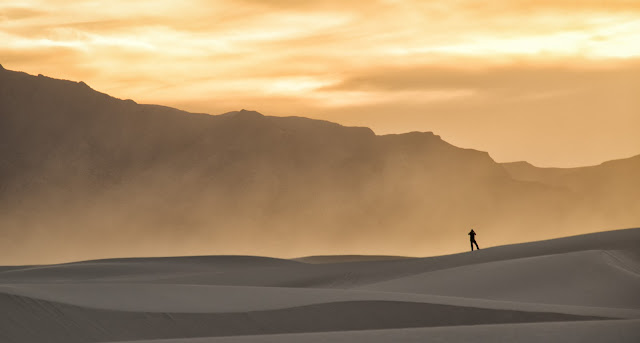 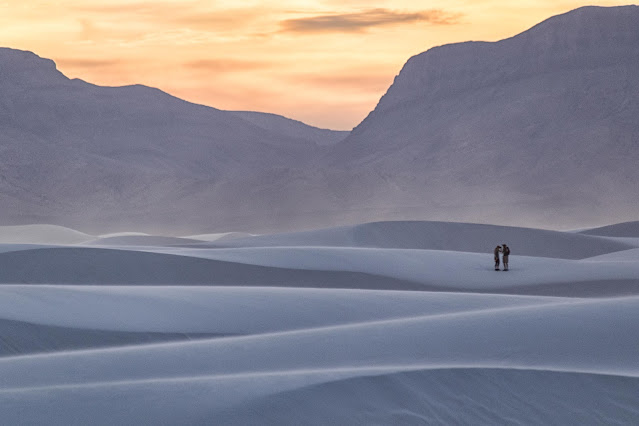 As the sun dropped below the mountains, I got a couple of "blue hour" shots . . . 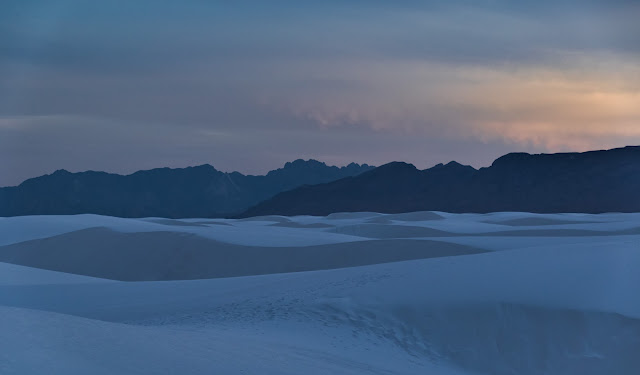 . . . and a final burst of color above the dunes and the mountains:

From the "golden hour" images to the final image above was about 15 minutes.

Based on the weather forecast and what we saw at sunset, we didn't have a lot of hope for moonset photos the next morning, but we went out anyway.  After all, we had driven all that way; stayed for two nights in a hotel; and paid $140 to get "early entry" into the park at 4:00am to allow time for drive-in, walk-in, and set up.  We would shoot whatever the light gave us. 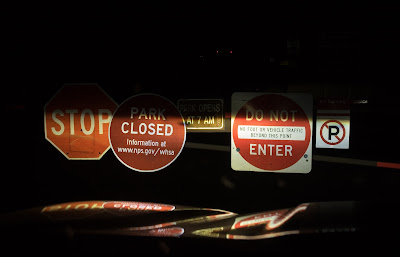 A park ranger showed up cheerful and helpful at 3:50am, and an hour later we were in position looking west, the moon still fairly high in the sky that was filled with clouds.

From 4:00am to 7:00am, we were the only people in the park, and with long exposures the moon provided an unearthly light.

As expected, we lost the orb of the moon well before it neared the horizon . . . so no moonset over the mountains.  But about 6:00am the sky in the east started to glow above the mountains and the lights of Alamogordo.  The sunrise show had begun.

Looking south (90° from the sun) I got some beautiful "blue hour" images like this one:

Then back toward the sun the whole eastern sky was lighting up:

Looking west, where the moon would have been, I was still getting some "blue hour" colors:

Then the east-facing slopes of the dunes began to glow:

And from this image I got my "Ansel Adams" black-and-white shot of the day: 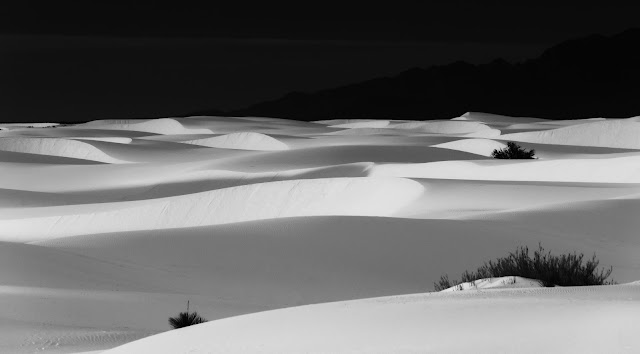 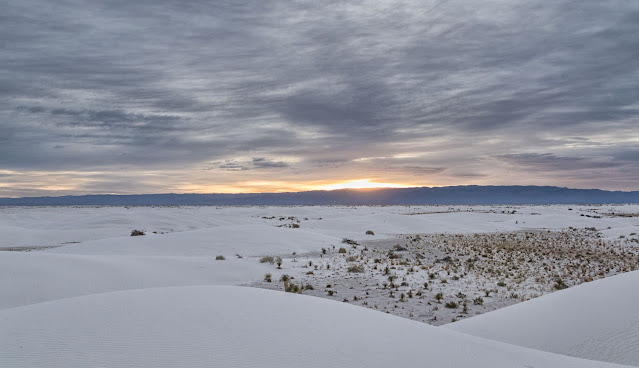 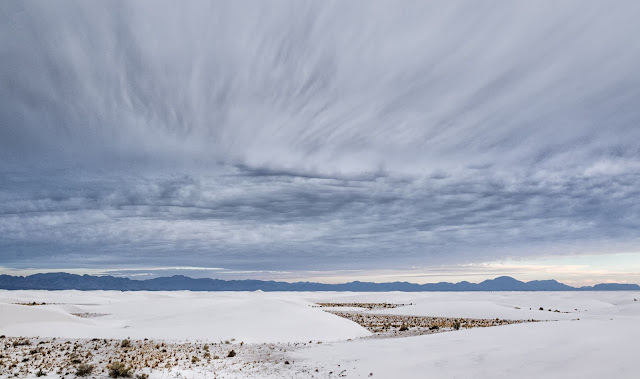 So we packed up, drove back to Alamogordo for breakfast; grabbed a quick nap at the hotel; then headed for home.  All in all, photographically a very successful trip, even though we didn't get what we originally went for.