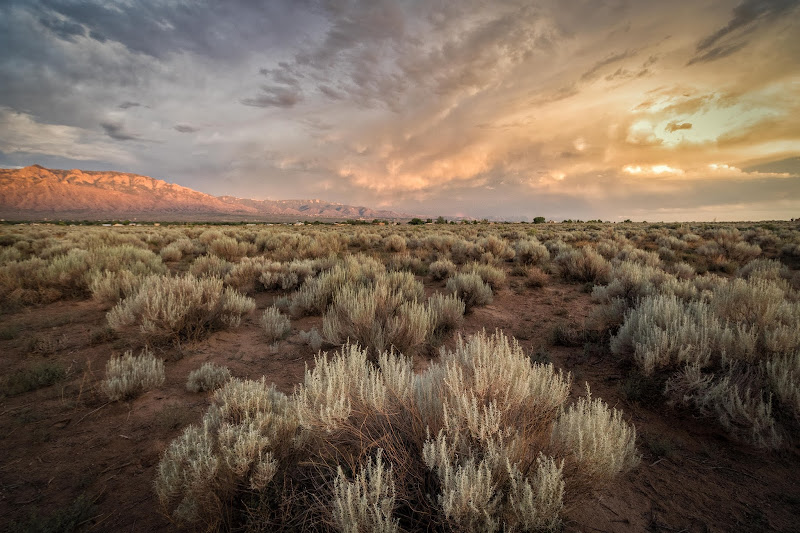 The rainiest season of our desert world -- when we normally get half our annual rainfall -- runs July through September.  That "half" amounts to about 4 inches, and the season is ironically dubbed the "monsoon" season.

Monsoon precipitation usually comes in brief, scattered, localized showers that pop up in the late afternoon or early evening -- not like the continuous drizzles or downpours in wetter climes.  And the rain almost always comes from dramatic cloud formations that are frequently photo-worthy.

About ten days ago, I was able to photograph one of those monsoon events from my own back yard and from a couple of locations within a hundred yards of my house -- without getting wet!

The main action began a little before 6pm.  A big cell had been building northeast of us all afternoon, and at first seemed to be moving southeast -- in effect, away from us.  But for some reason it suddenly turned directly south and moved down the Rio Grande River valley toward Albuquerque. 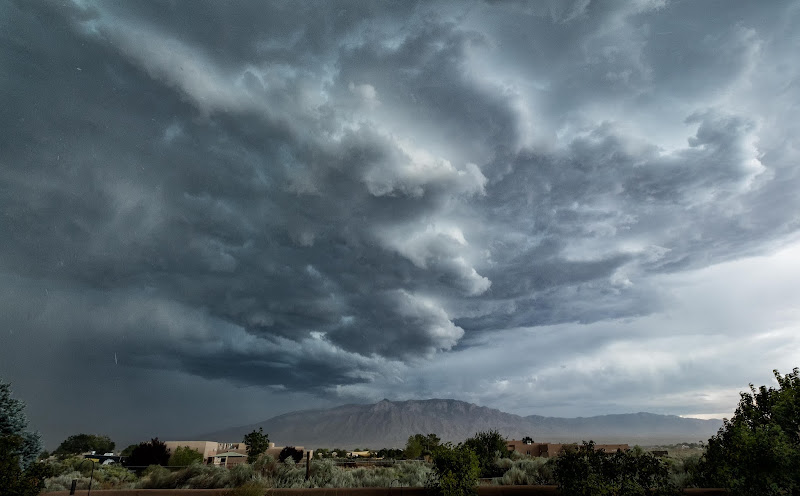 In the image above I'm looking a bit south of east toward the Sandia Mountains, which you see at the bottom of the image.  The storm cell is moving from left to right (north to south), with the front (in the center) followed by the rain (on the far left of the image).  If you look closely, you may be able to see a few tiny white streaks on the left side of the image -- those are raindrops captured by the camera.

As the storm passed from north to south, you could see the sheets of rain obscuring the mountains:

It took about an hour for the storm to pass by; then the clouds began to break and the setting sun gave us a rainbow and some dramatic anti-crepuscular rays. 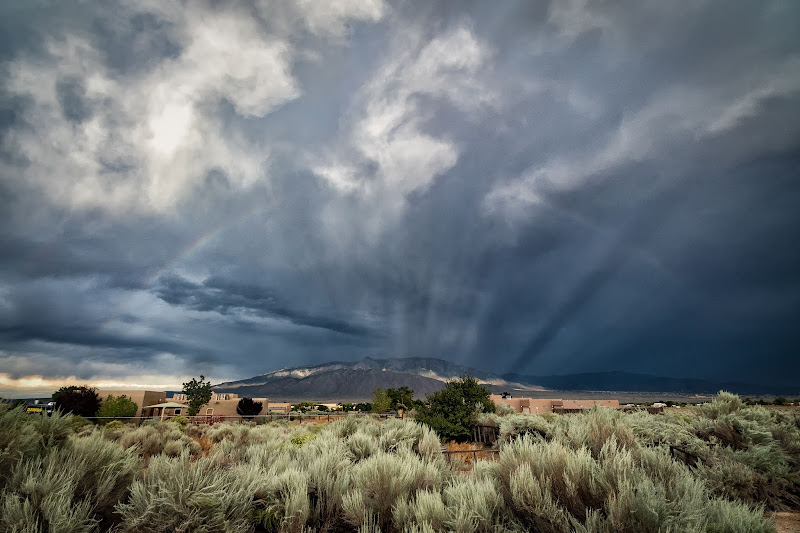 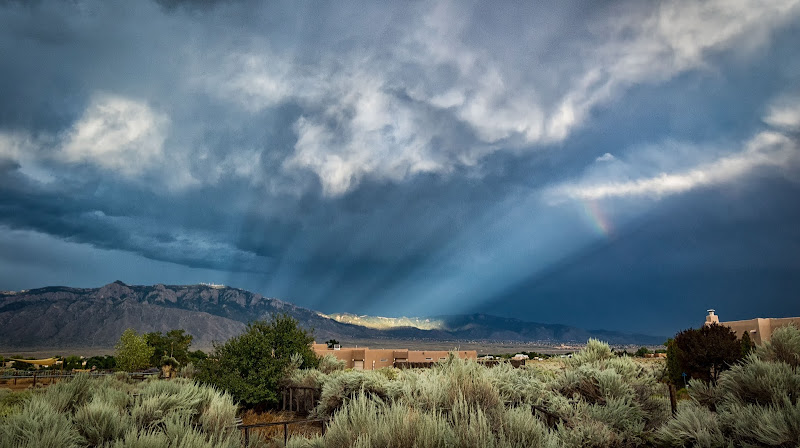 A few minutes later, the anti-crepuscular rays faded and the trailing edge of the storm came into view (left side of the image below): 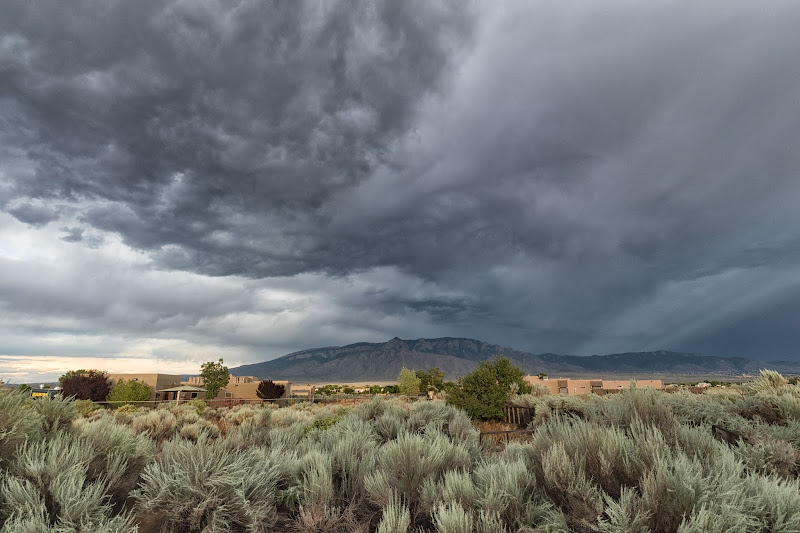 At this point, I moved from my back yard out to the street to get a better view of the trailing edge . . . and the clouds obliged by letting the sun shine on the scene: 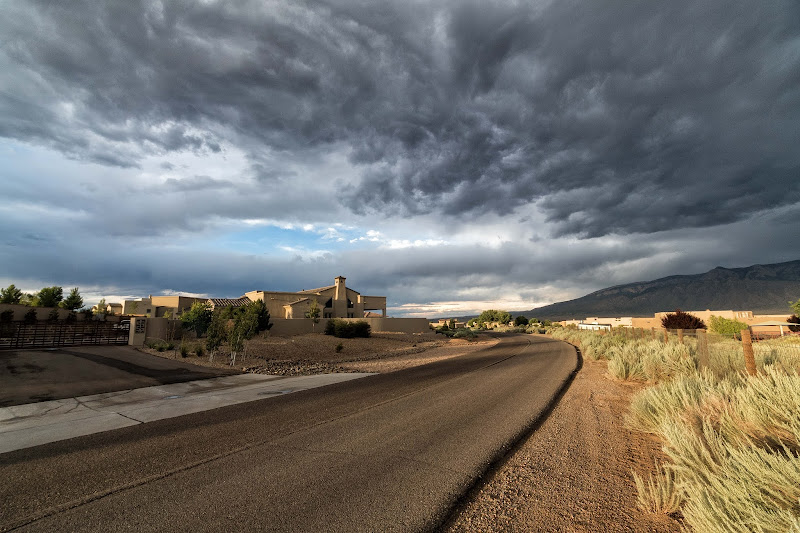 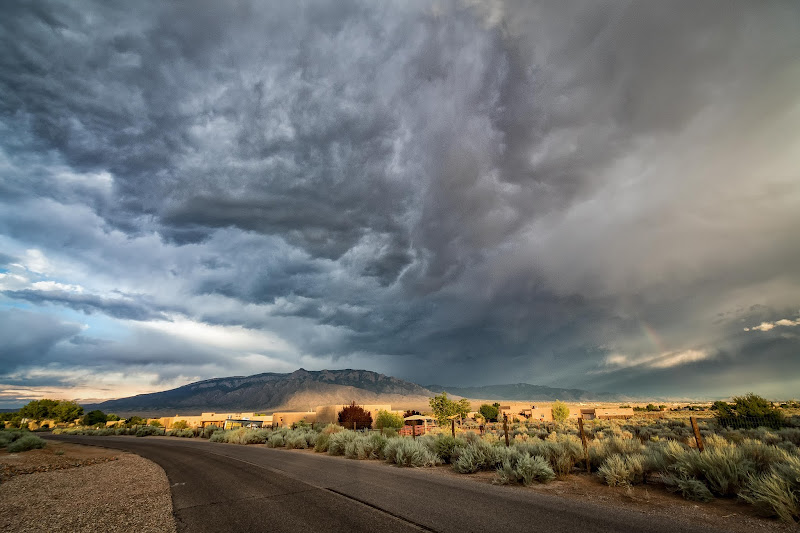 As the storm cell moved further south, you could see the entire formation: 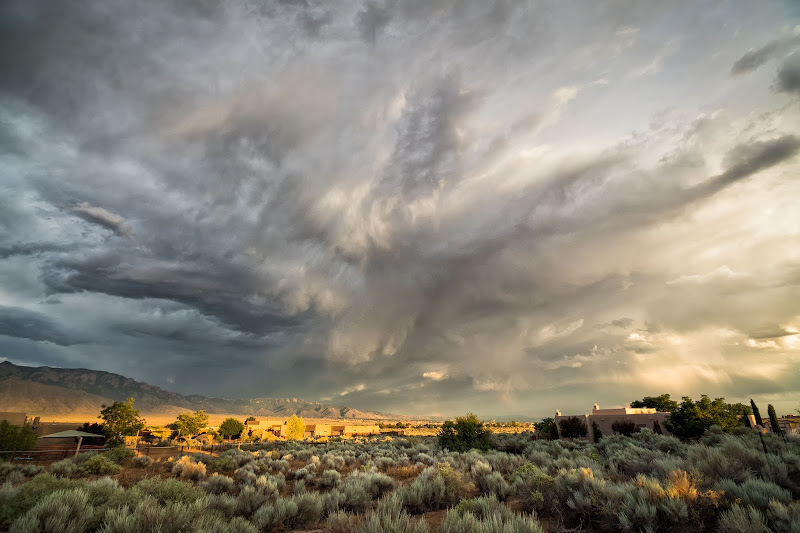 To get a better view of the receding storm, I walked around to a huge open space on the south side of my house, where I had a clear view of the Sandias (about 10 miles to the east) . . . 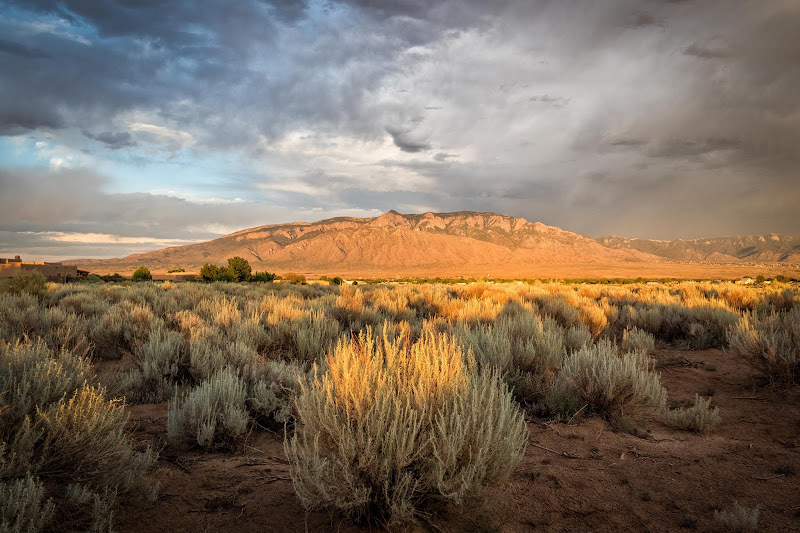 and all the way to the north side of Albuquerque (about 10 miles southeast). 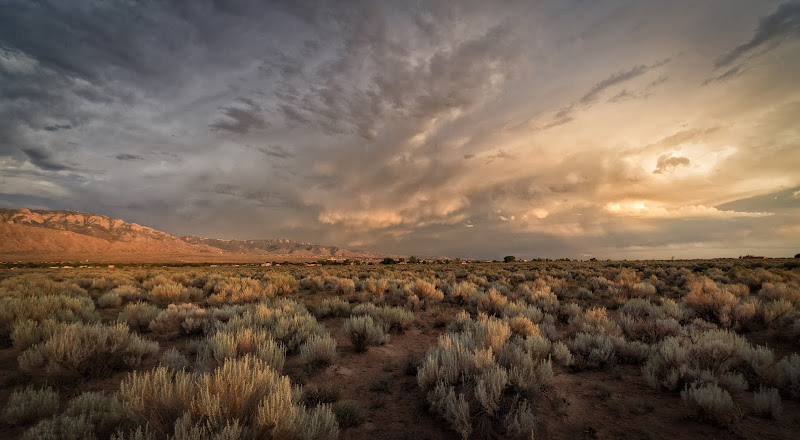 The storm kept moving south and, as the sun set, the upper levels of the storm were illuminated while the lower levels grew dark: 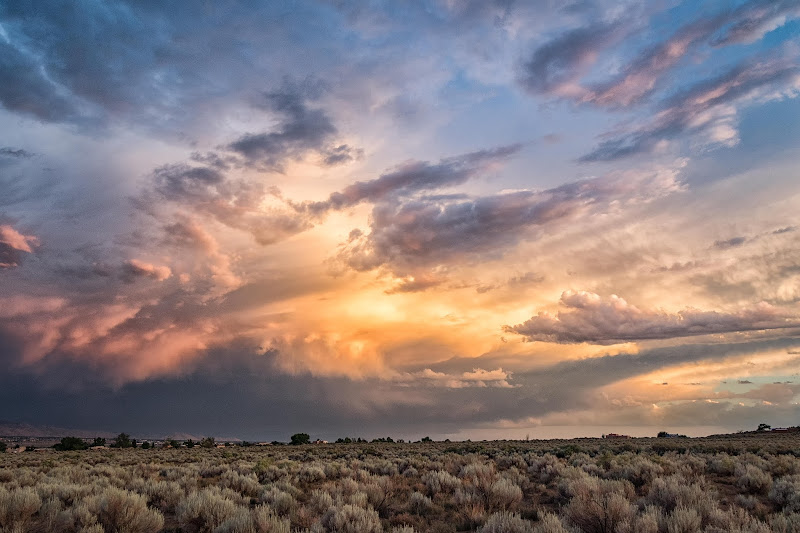 The last light of the setting sun dissolved in the west and, after two hours and twenty minutes, the show was over. 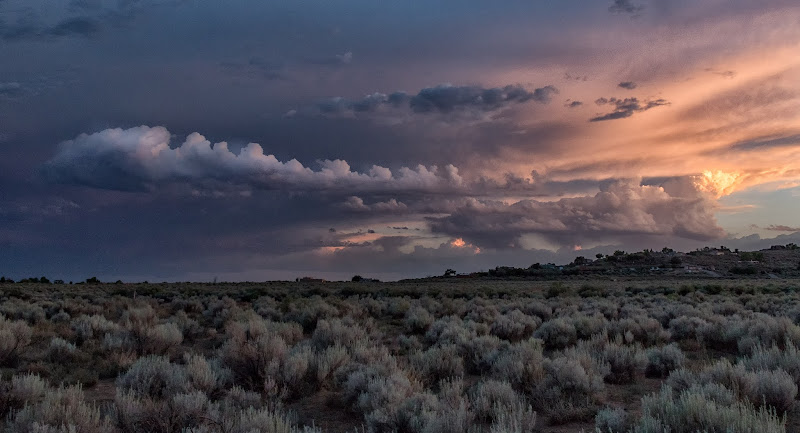 Besides the giant cloud formations, I was also captivated by (relatively) smaller details within the larger scene -- clouds within clouds: 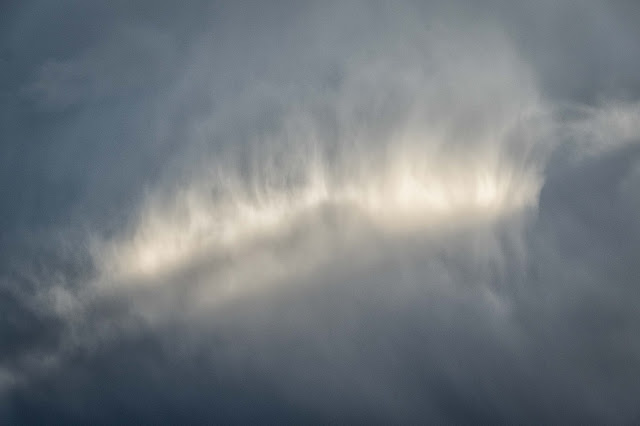 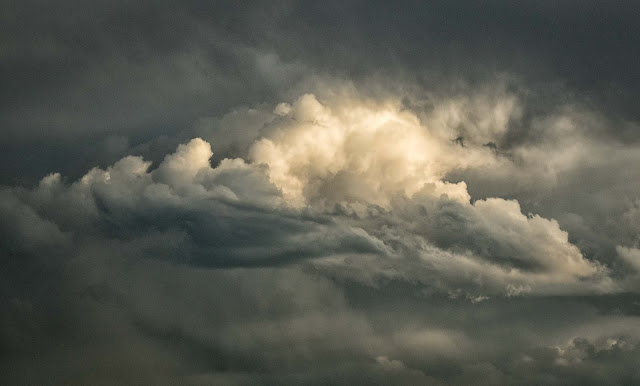 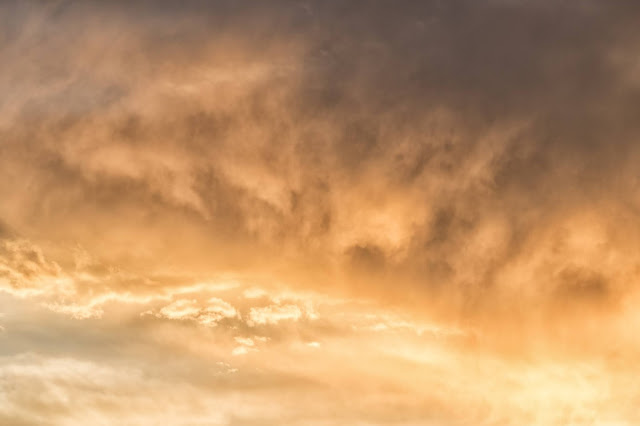 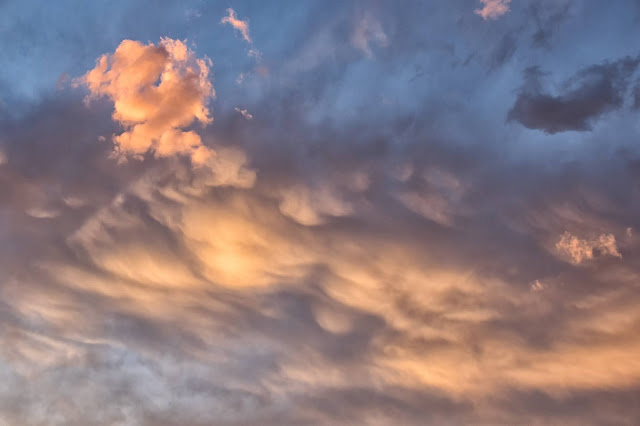 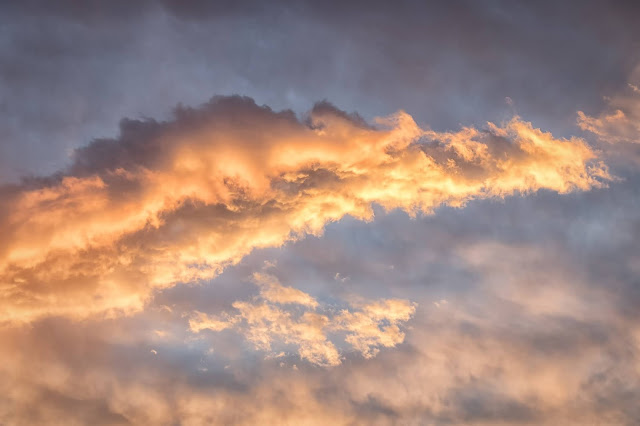 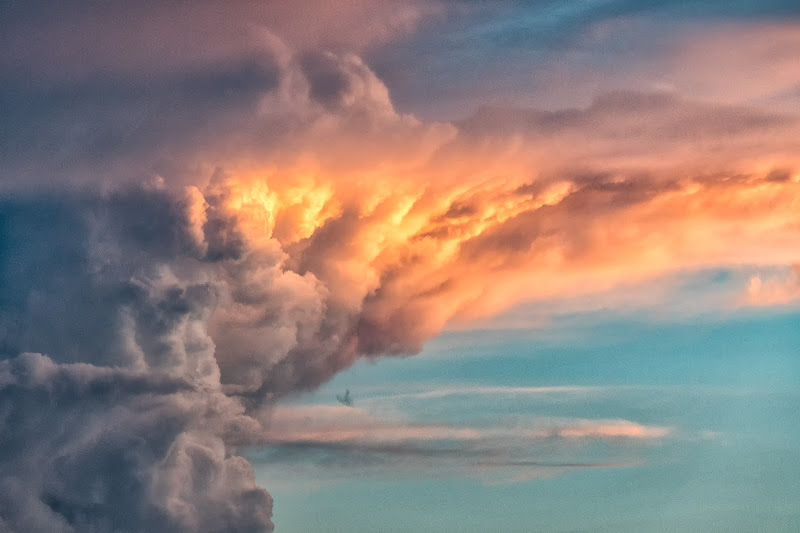