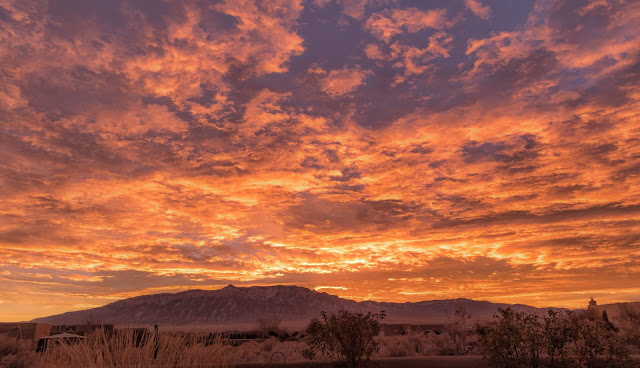 I will lift up mine eyes unto the hills, from whence cometh my help.

All my earlier "Covid Respite" activities involved hopping in the car and traveling around New Mexico.  This one, however, required only that I step out my back door and look east toward the Sandia Mountains at sunrise.

To get a beautiful sunrise, clouds and sun have to move into the right place at the right time.  And of course the photographer has to be there to capture it.  This is the story of one of those times/places.

The morning began with an overcast sky.  But about 6:20am, ominous streaks of red across the dark clouds began to appear,  suggesting that somewhere behind the mountain there might be a gap between the horizon and the cloud deck where sunlight could shine through.  I was counting on that.

The clouds were moving right to left -- more or less southwest to northeast -- and in a few minutes gaps began to appear in the overcast (on the right side of the two images below).

All the while, growing light from the east began to illuminate the underside of a big bank of clouds moving in.

As the red cloud blob faded away to the northeast, more clouds came streaming in from the southwest.

Though there is some brightness and color on the northeast horizon (left side of the image above), the sun is actually rising in the east-southeast (see arrow in the same image below). 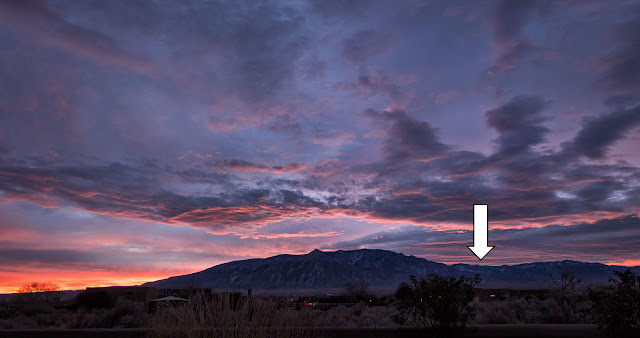 So at this point it's not clear whether there will be a gap between the clouds and the horizon for the sun to shine through.  The next few minutes would tell.

Six minutes later, I had my answer.  The clouds in the direction where the sun was rising (on the right in the image below) began to light up, as did the clouds to the northeast (left of the mountain).

Here's a closer look in the direction of the sunrise:

A minute later the sunlight is reaching further overhead.

As the sun rose behind the mountain, the reds intensified and cast an eerie red glow over the entire landscape.

Besides documenting the big picture, I enjoyed looking for interesting details: 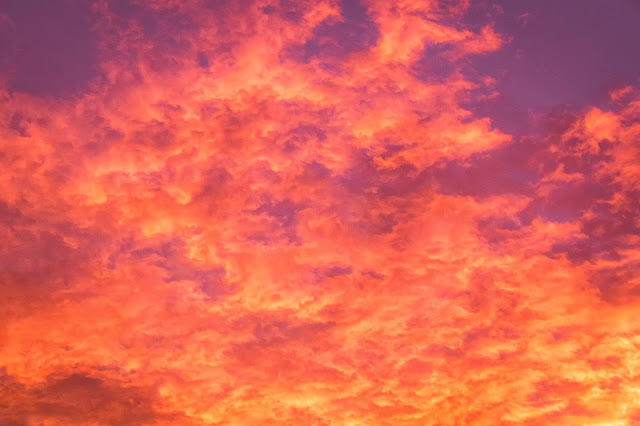 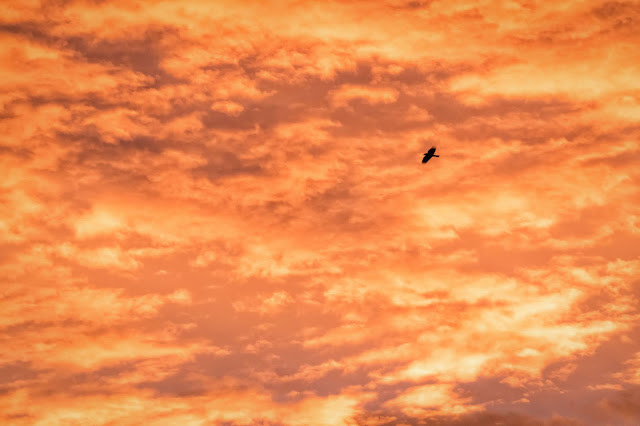 Eventually, of course, like all good things, the sunrise would come to an end.  The light on the clouds quickly began to withdraw back toward the east as the sun slipped up above the cloud deck, and in a matter of minutes, the light went out of the sky, returning the landscape to semi-darkness.

I hope you enjoyed the show as much as I did!  If you would like to see these images in a larger format, please visit my photography website, Todos Juntos Photography, by clicking here.

Covid Respite #9 - More Than a Rock 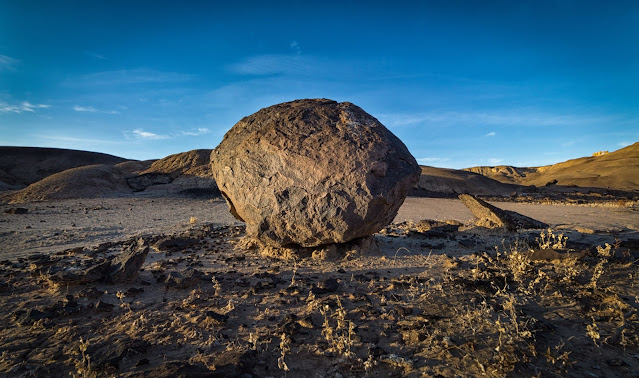 This then:  to photograph a rock, have it look like a rock,

but be more than a rock.

One of my favorite areas to photograph in the northwest New Mexico badlands is the Black Place . . . so named by Georgia O'Keeffe who would travel there from her home in Abiquiu to paint. I have visited it many times (including my first Covid Respite trip back in June) and have posted numerous blog installments about it -- here, here, here, and more.

In mid-November I went once again with my friend, Alan, this time to catch the late afternoon "golden hour" and post-sunset "blue hour" light. 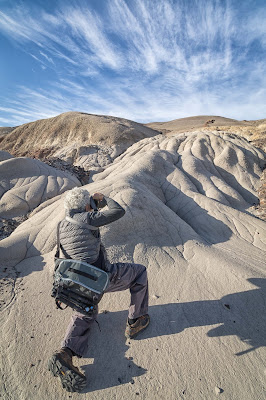 The primary features of the Black Place that attracted Georgia O'Keeffe . . . and me . . . are the soft hills of ancient dried mud that have been sculpted by erosion over millennia. 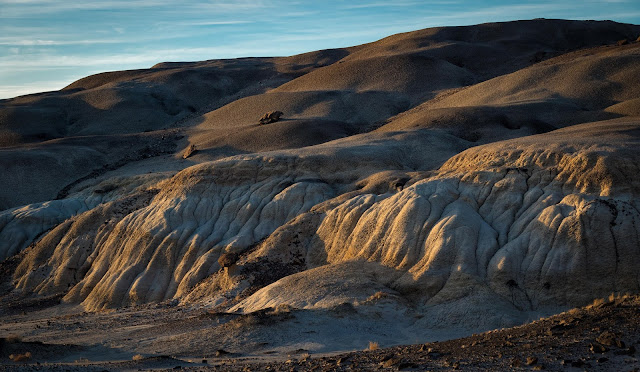 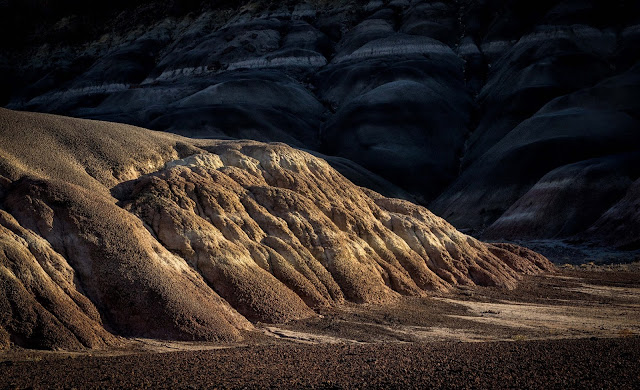 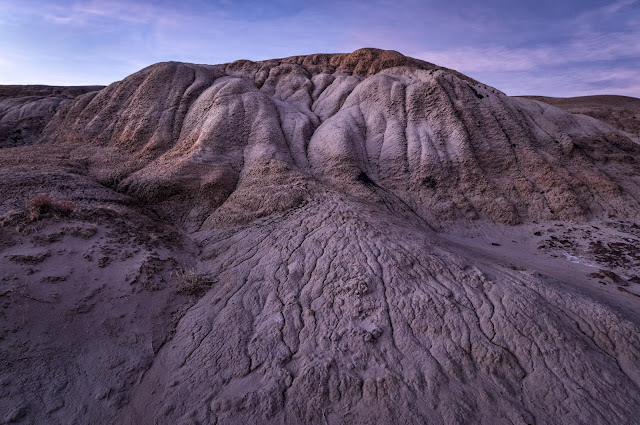 At the same time, however, one feature of the Black Place has always vexed me:  rocks . . . rocks strewn like debris all over the place.  Little rocks, big rocks, flat rocks, round rocks . . . littering the entire area.  Visual clutter, the bane of a photographer's existence! 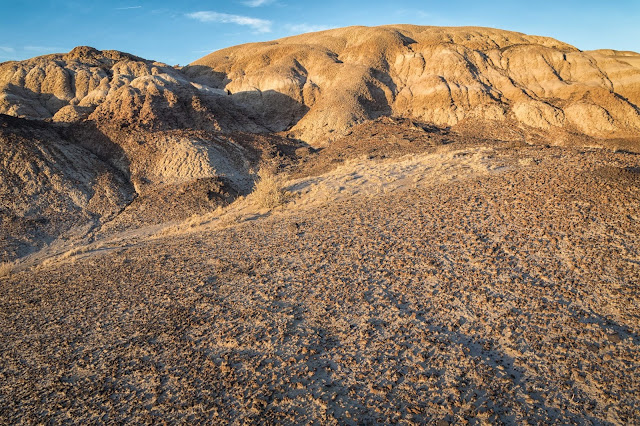 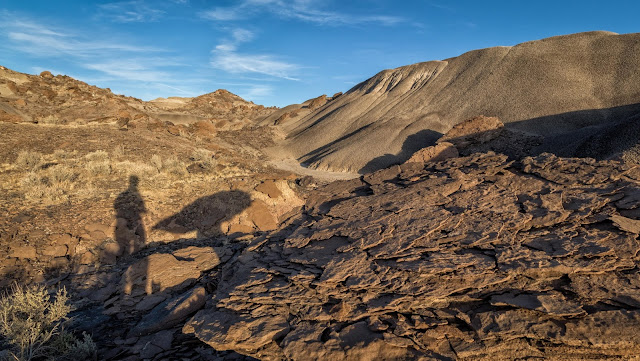 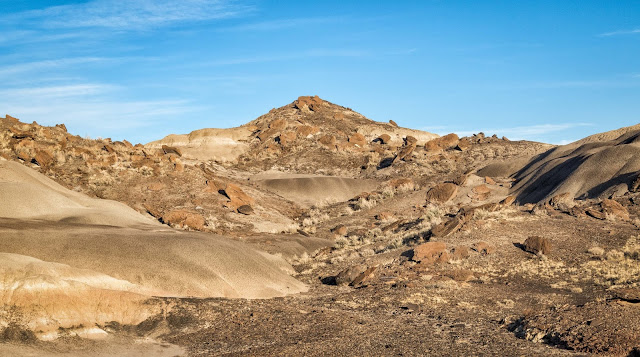 So on this visit, I made a point of trying to find a way to elevate the trashy rocks into something . . . I don't know . . . better, more interesting.  As Edward Weston said, photograph them somehow to have them "be more than a rock."

Here, then, are a few of my attempts (including the image at the top of this post): 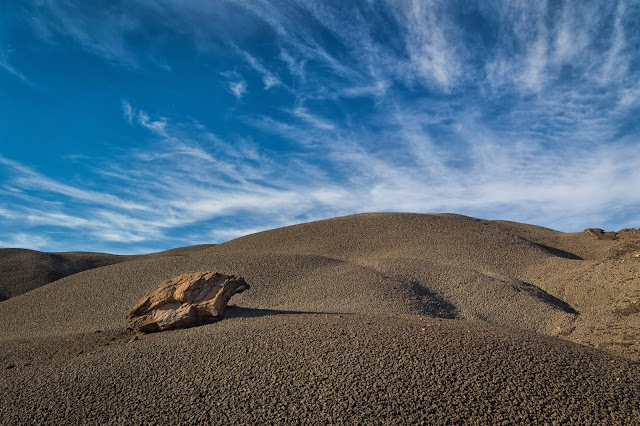 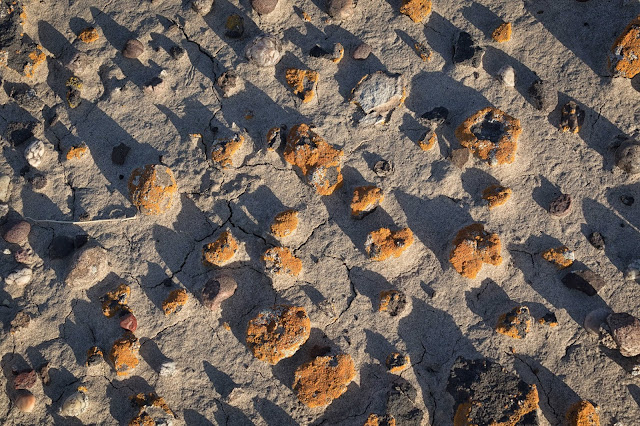 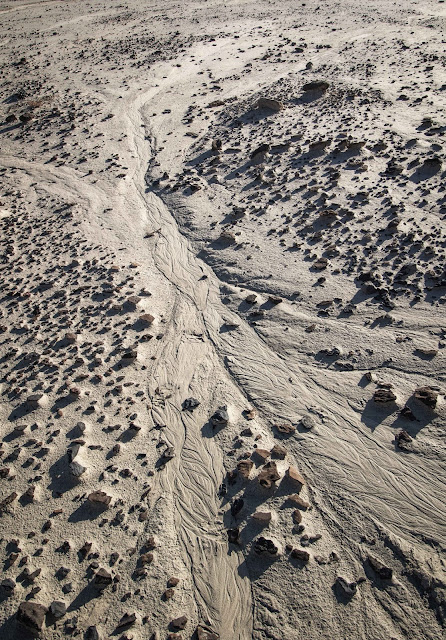 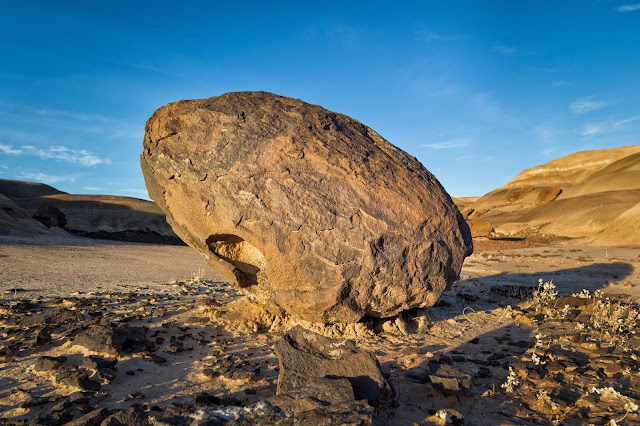 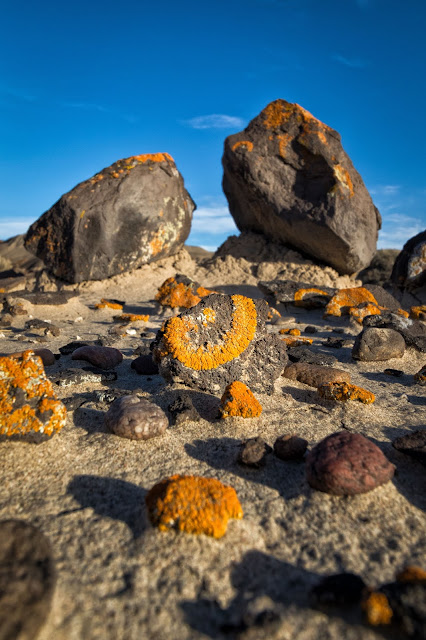 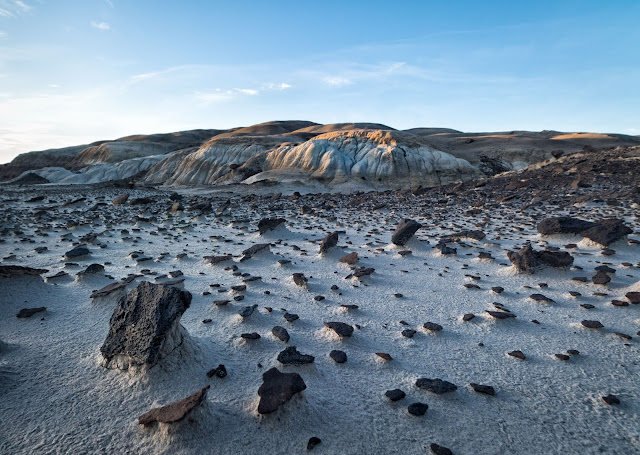 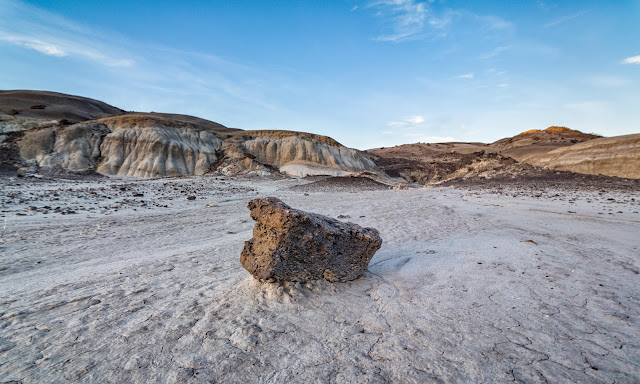 In addition to the usual geological features, we were treated to a few astronomical phenomena as well. 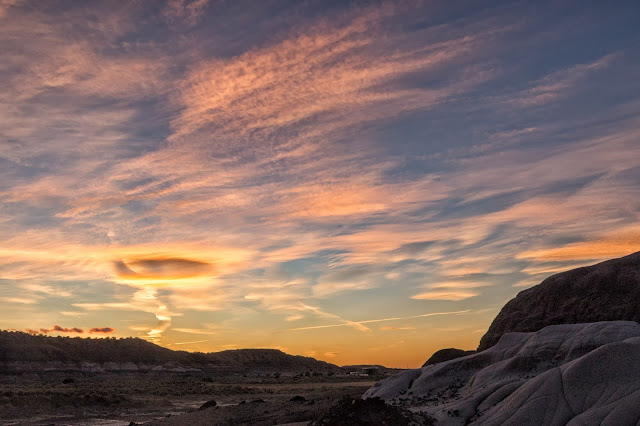 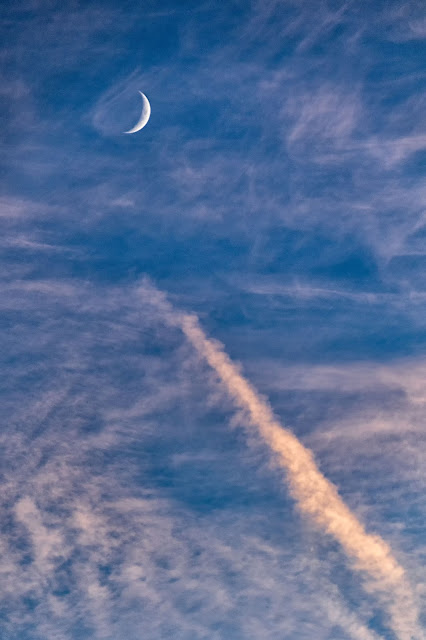 And, by sheer luck, the International Space Station streaking across the sky until it disappeared in the Earth's shadow: 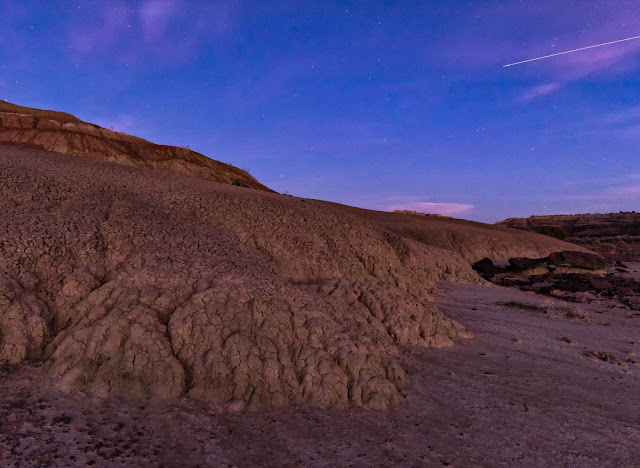 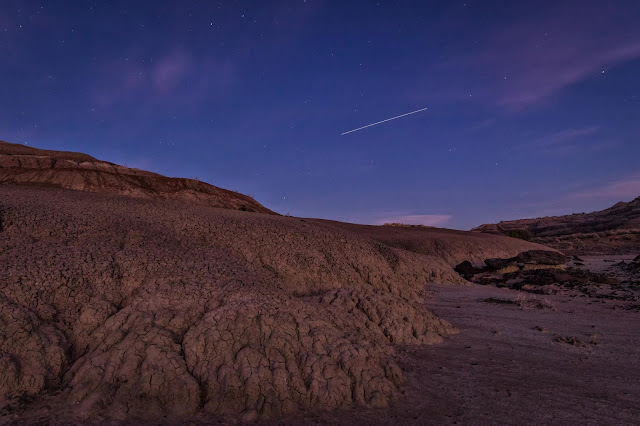 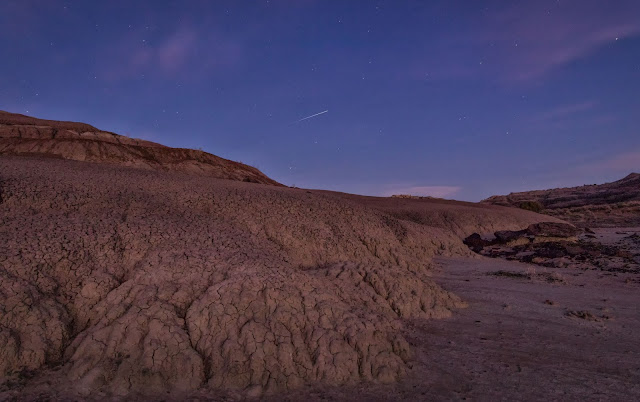