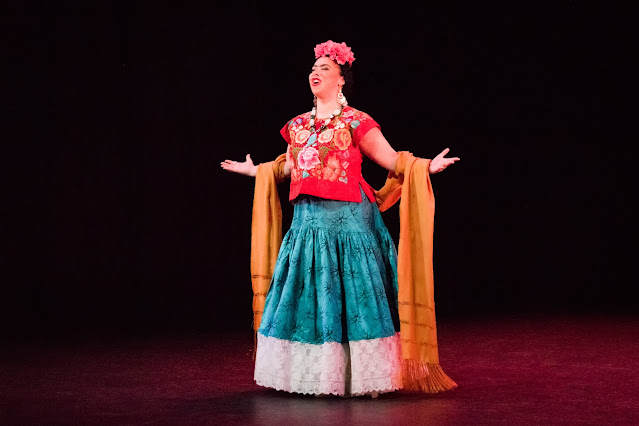 After a two-year hiatus caused by the Covid pandemic, in February I returned to opera photography at the dress rehearsal for Opera Southwest's production of Frida, based on the life of Mexican painter Frida Kahlo (1907-1954).  The opera premiered in 1991, and since then has been produced at the American Repertory Theater (Cambridge, MA), the Brooklyn Academy of Music, Houston Grand Opera, and many others.

During the 2.5 hour production I shot over 2,000 images, and winnowed them down to about 400 which are available for viewing at my photography website, Todos Juntos Photography, here.  For this blog post, however, I'll just share a brief synopsis and selected images from the production.

The opera opens with a dramatic image of three muertes (death figures from Mexican folklore) wearing calaveras (skull masks), who reappear throughout the opera. 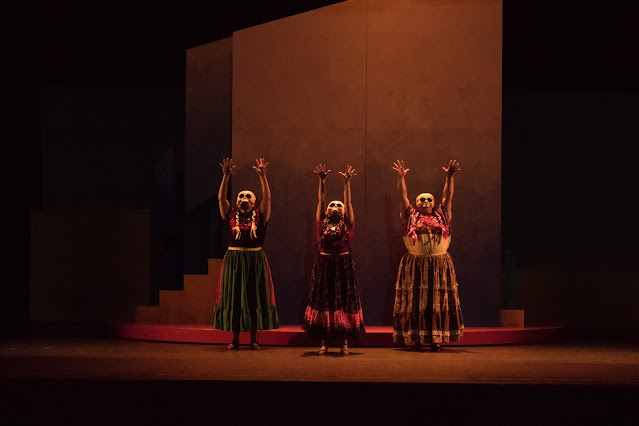 The opera then chronicles Frida's life from her schoolgirl-hood . . . 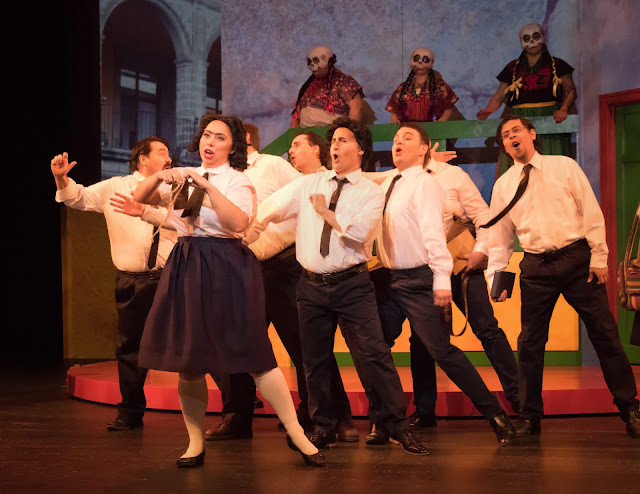 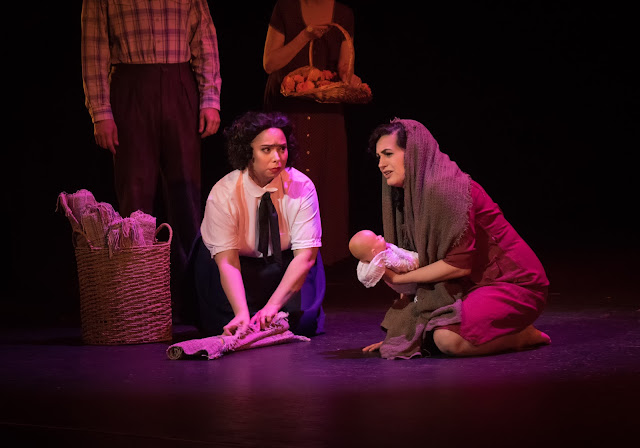 and the awakening of her social consciousness in the Zapatista movement. 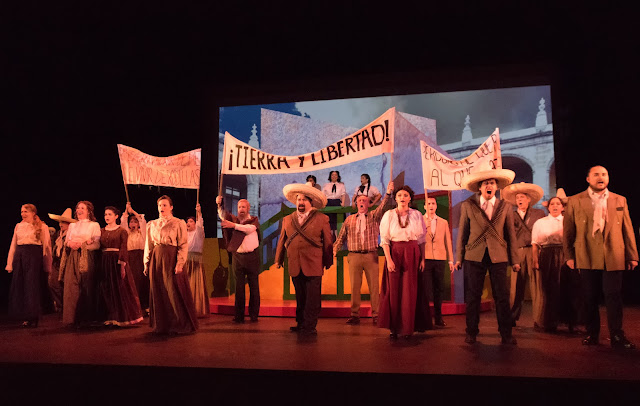 At age 18 she was in a bus accident that left her severely injured and in lifelong pain. 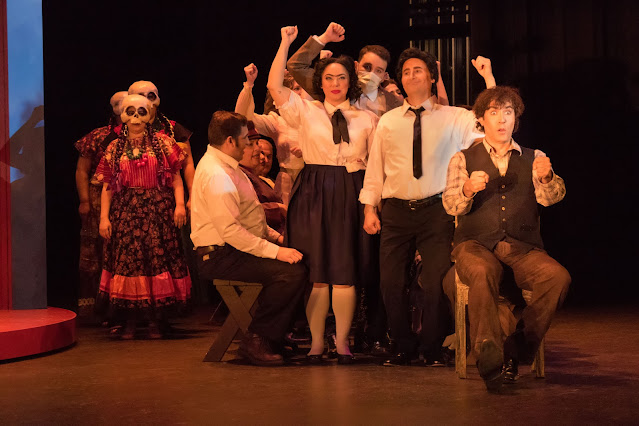 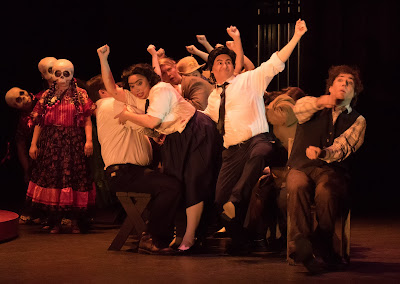 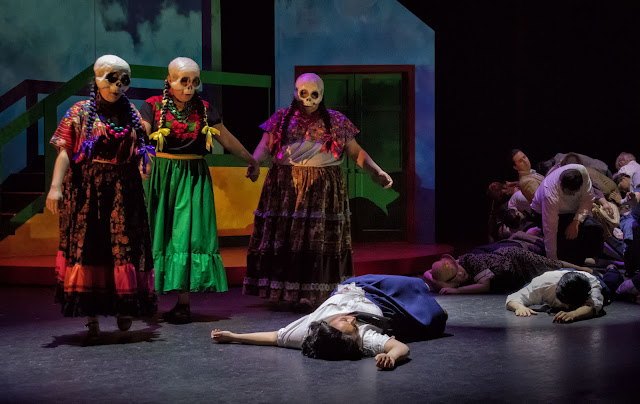 During her three-month convalescence, Frida took up painting . . . 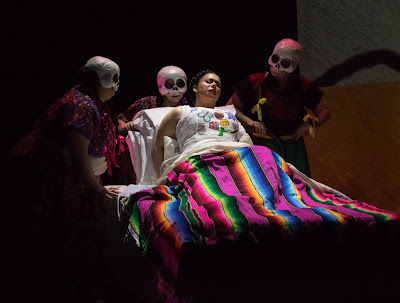 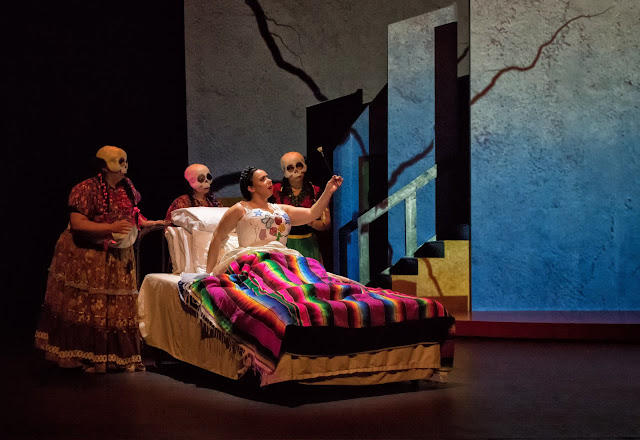 then introduced herself to the famous Mexican muralist Diego Rivera, twenty years her elder . . . 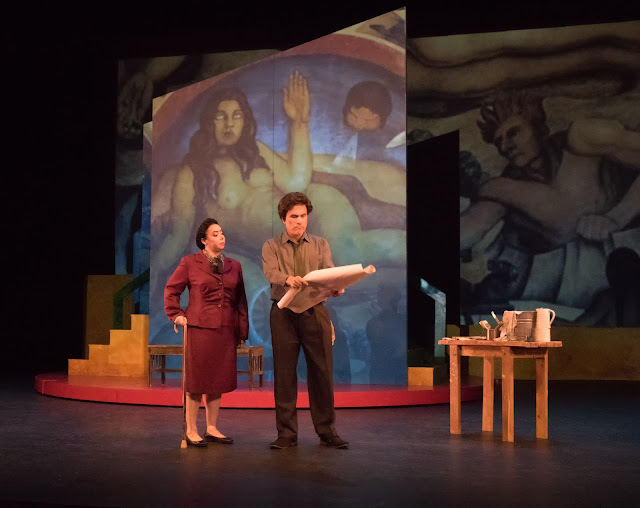 . . . whom she married after he divorced his second wife. 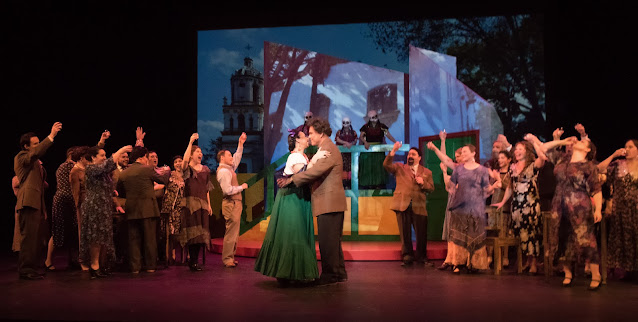 Rivera was a member of the Communist party, but the political climate in Mexico turned against him . . . 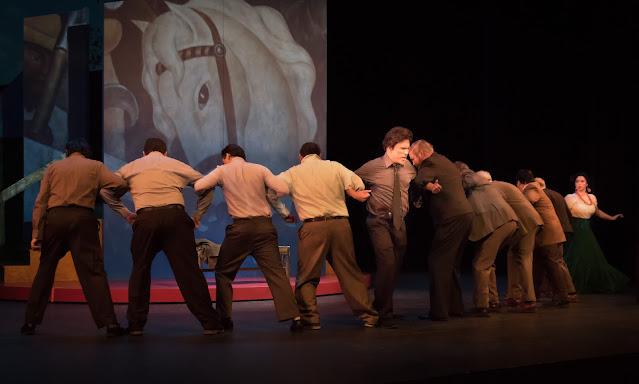 . . . so he and Frida decided to try their luck in the United States.  In the early 1930s they arrived in New York and were fêted by John D. Rockefeller, Jr. and Edsel Ford. 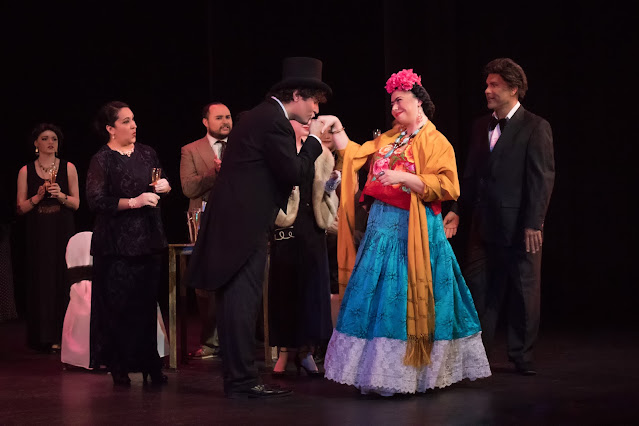 In Detroit, while Rivera worked on a massive mural in the Detroit Institute of Arts, Frida suffered a miscarriage and spent two weeks recovering in Henry Ford Hospital. 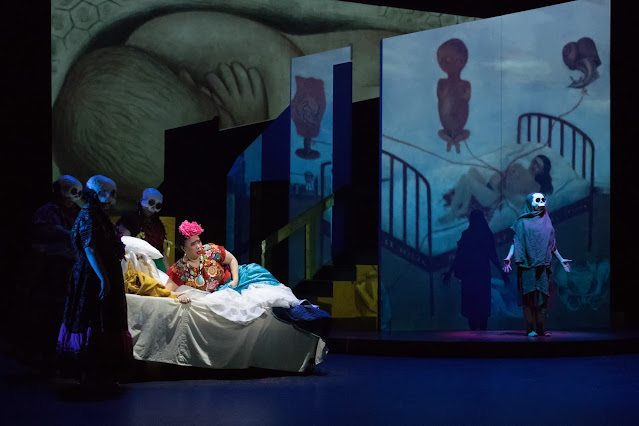 When Frida and Diego returned to Mexico, her painting flourished . . . 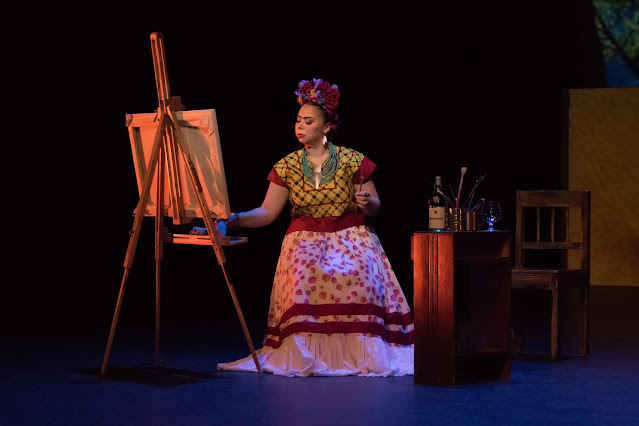 . . . and he engaged in numerous extramarital affairs, including one with Frida's sister. 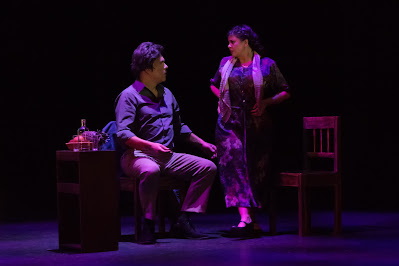 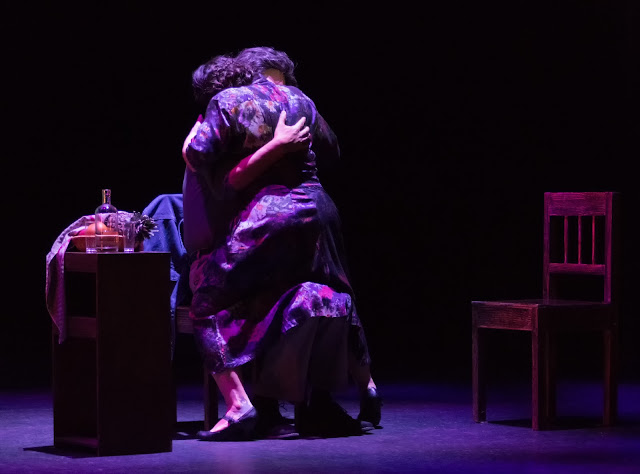 In retaliation, Frida had affairs of her own, including one with Leon Trotsky, exiled from the Soviet Union to Mexico . . . 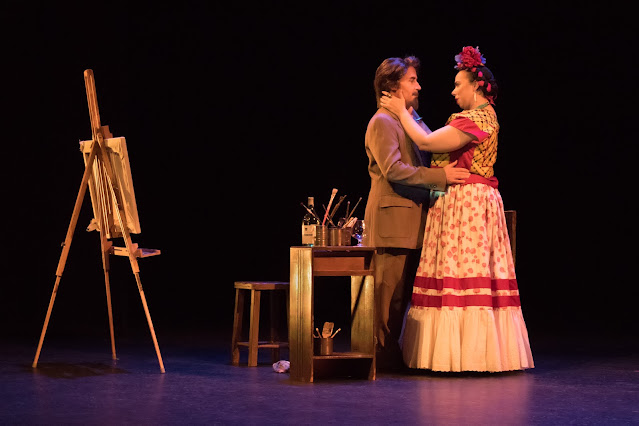 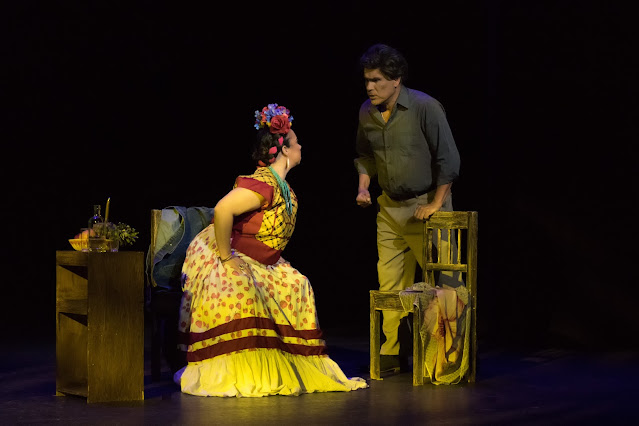 and explored other aspects of her sexuality. 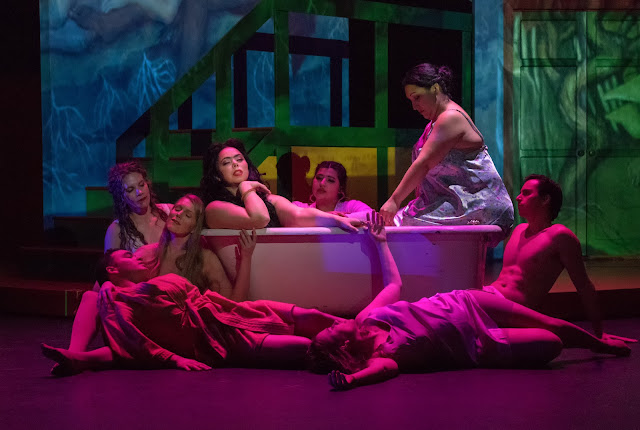 Eventually, she and Rivera divorced, and, haunted by her physical and emotional pain, she created surrealistic autobiographical paintings while restricted to a wheelchair and bed. 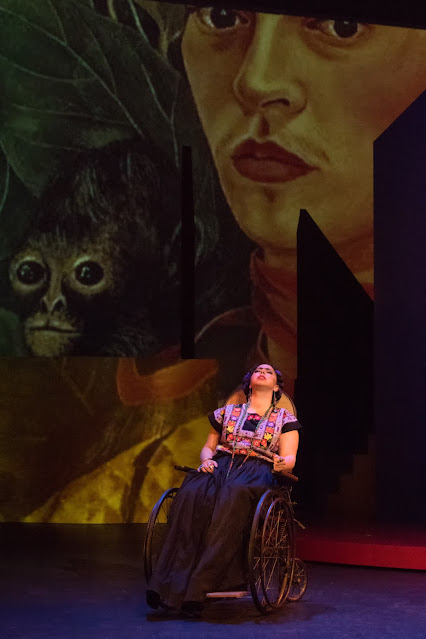 The opera ends when, a little more than a year after their divorce, Frida and Diego are reconciled and remarry. 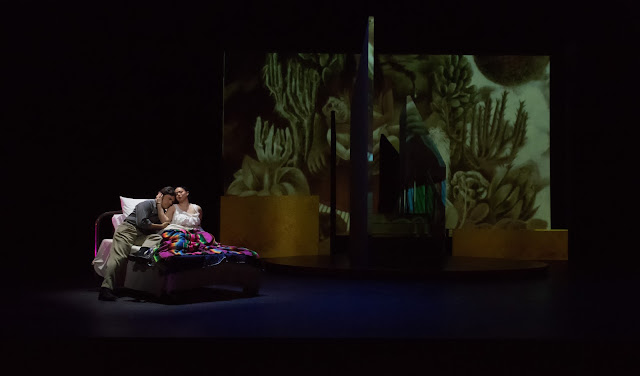 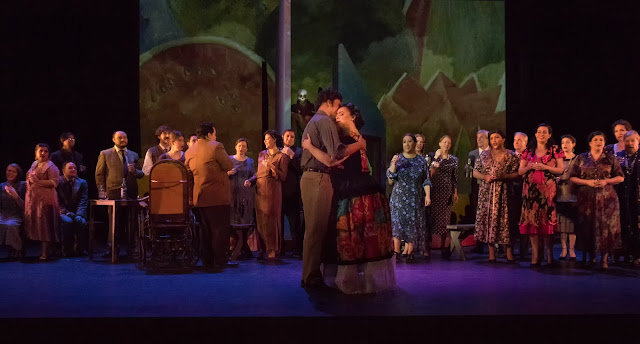 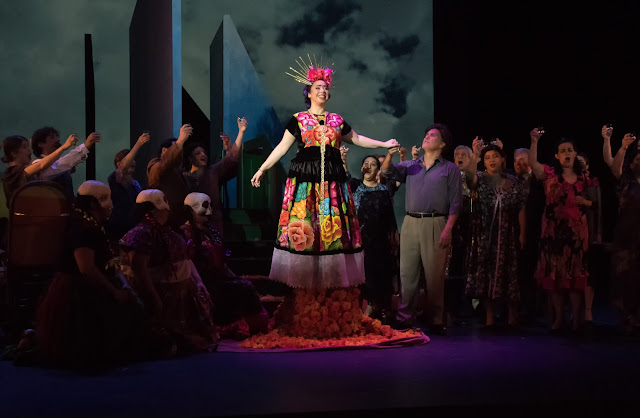 If you would like to see these images -- and many more from the production -- in a larger format, please visit my photography website, Todos Juntos Photography, by clicking here.
Enjoy!
Posted by Lance Ozier at 2:54 PM No comments: