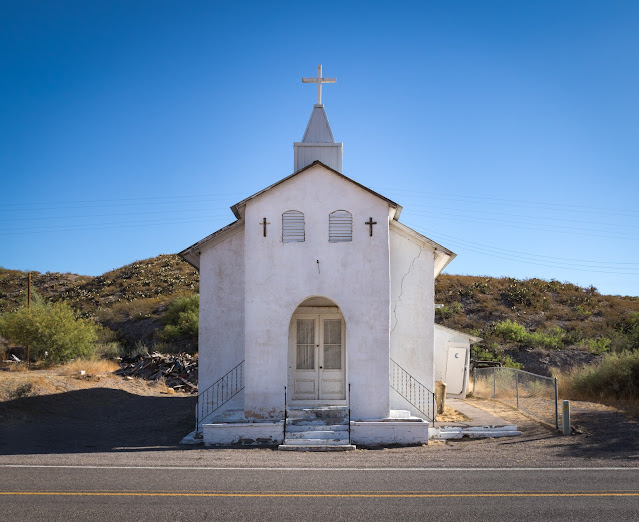 This is an account of Day 2 of our photography tour of village churches in south-central New Mexico.  You can read about Day 1 in the post below this one or by clicking here.

Here's a map of the five villages northwest of TorC that we visited on Day 2. 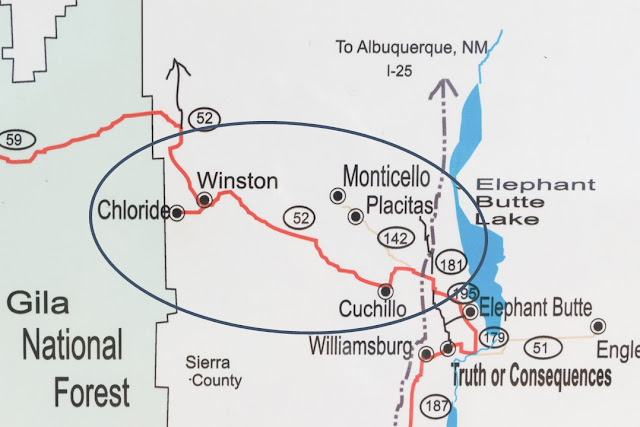 After overnighting in Truth or Consequences, NM, our first stop on this day was Cuchillo, NM (pop. approx. 35).  Cuchillo was settled in the late 1800s, and its San Jose church was built in 1907. 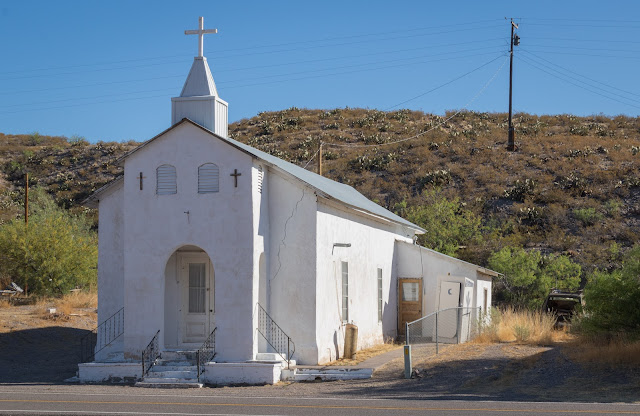 One of our party investigated the outdoor confessional. 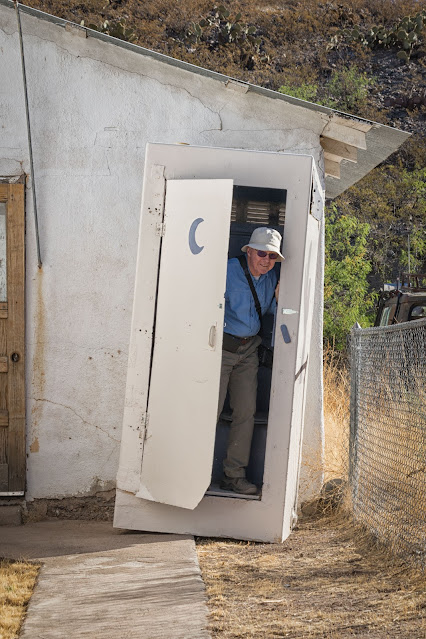 Right next door to the church was a sign and other icons in a more fundamentalist vein: 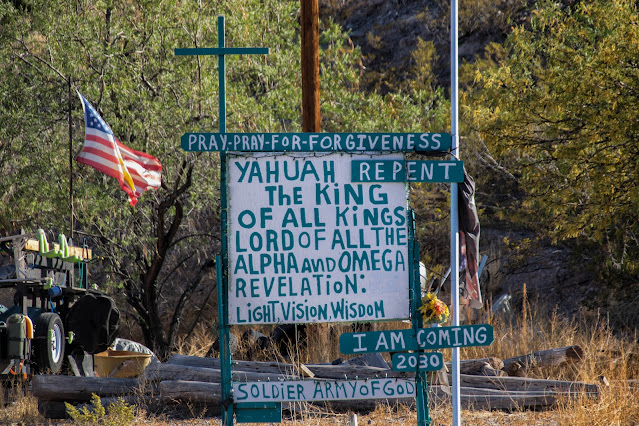 From Cuchillo we traveled west to the eastern edge of the Gila National Forest to visit the almost-ghost town of Chloride.

Chloride began as a tent city boom town in 1880 when silver was discovered in the canyons and mountains to the west.  At its peak, Chloride had a population of about 3,000 -- mostly hard working, hard drinking miners.  There were nine saloons, three general stores, a hotel, an assay office, and a red-light district . . . but no church.

Chloride survived the Panic of 1893, but by 1900 the ore had been exhausted and the town became a quiet little village.  Population today is about 20, with some descendants of original settlers.

One of the original buildings -- the Pioneer Store -- has been converted to a museum housing all manner of artifacts from the early days of Chloride. 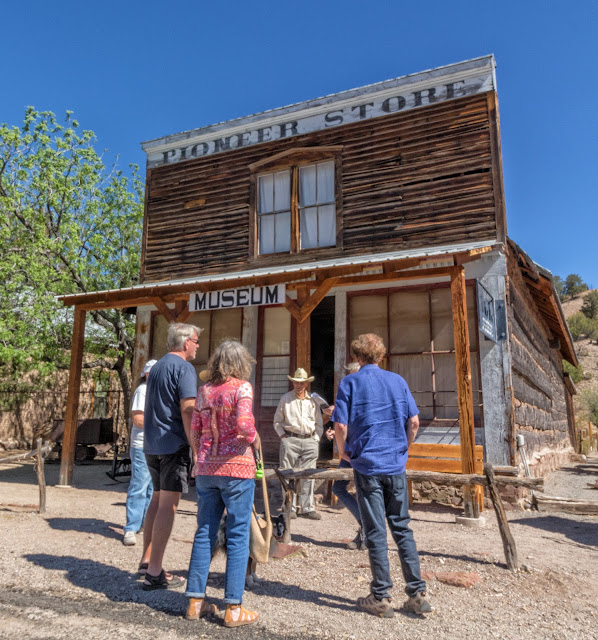 We were able to look around for about an hour inside the museum. 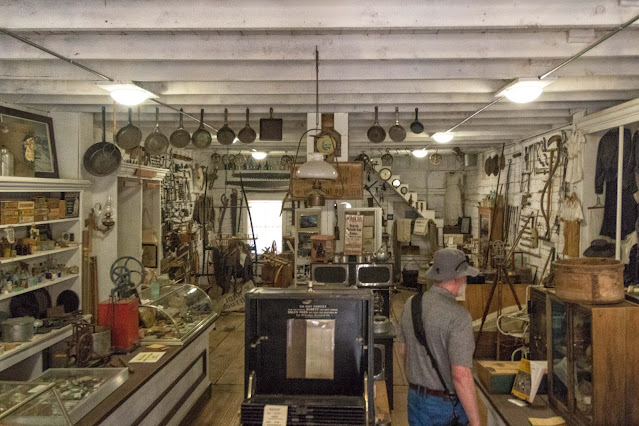 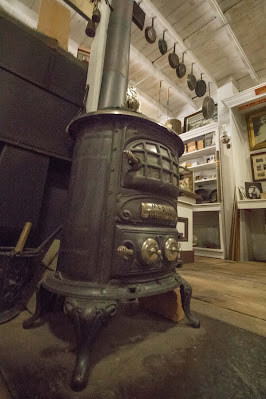 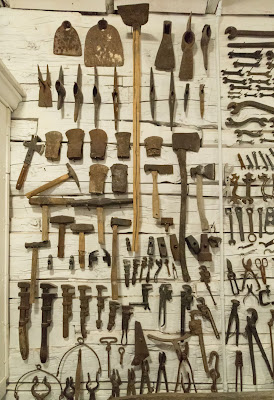 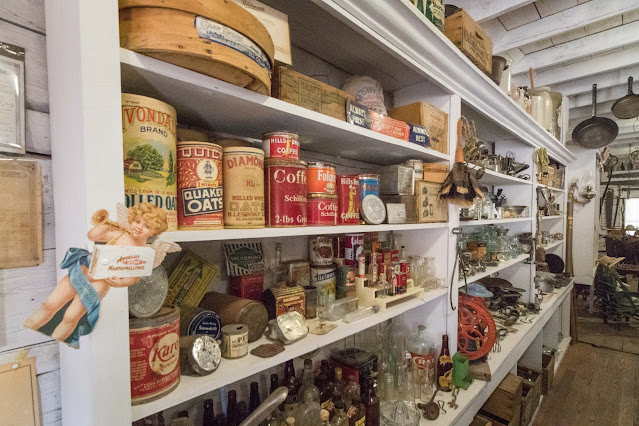 From Chloride we backtracked 2.5 miles to Winston.  Like Chloride, Winston was originally a mining town, founded a year after Chloride by miners who thought Chloride was "too rowdy."  But after the Panic of 1893 Winston evolved into a farming community, population 64 in 2020 census.  Accordingly, its St. Jude Mission church is small, but clean and well cared-for; the interior is filled with religious icons. 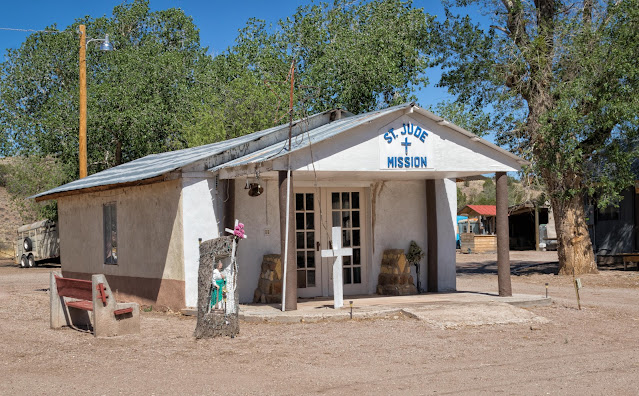 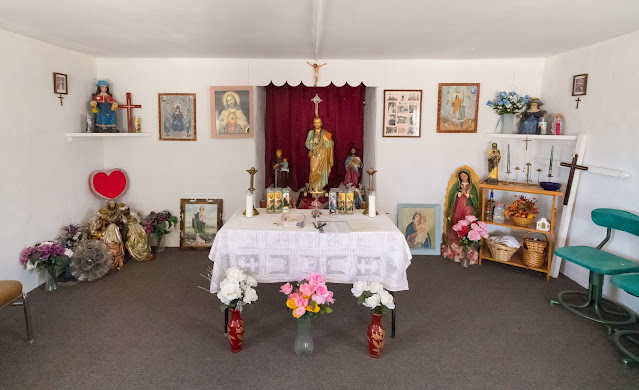 Next stop was Placita (not to be confused with Placitas, NM, north of Albuquerque).  The village was founded in the 1840s primarily for farming and ranching in Cottonwood Canyon where water was available.  (Any time you see cottonwood trees in New Mexico, you know there's a source of water nearby.)  Population in 2020 was recorded as 576.

According to some accounts, Placita was founded in the 1840s by the Sedillo family.  The San Lorenzo Catholic church, similar in style to the church in Cuchillo, was built in 1916. 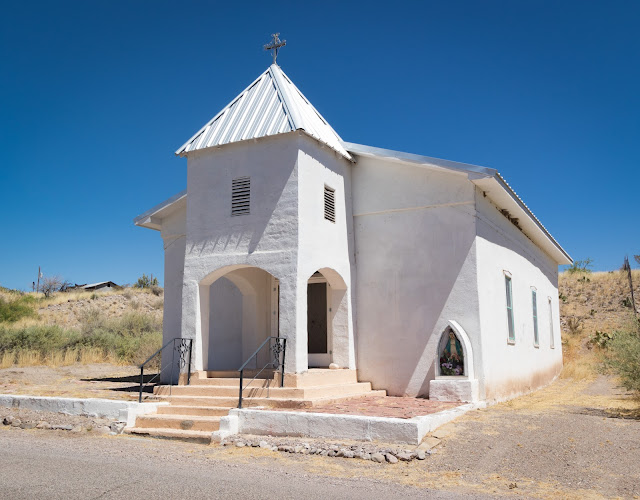 We were able to enter this church and look around. 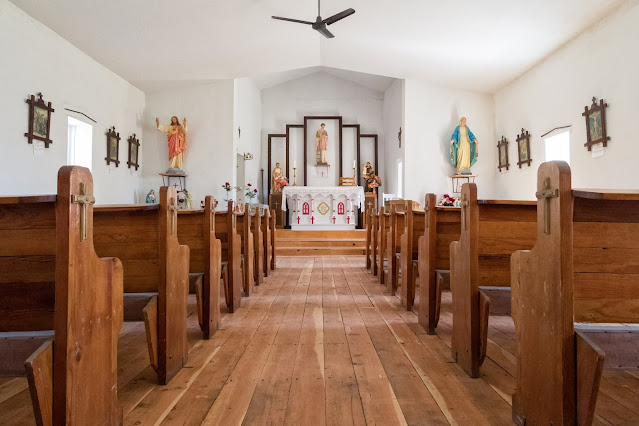 Two miles up the road from Placita, our last stop before lunch was Monticello, NM (pop. 84).  Founded by farmers and ranchers in Cottonwood Canyon in 1856, its San Ignacio church was built in 1867.  These days Monticello is known for its organic farms. 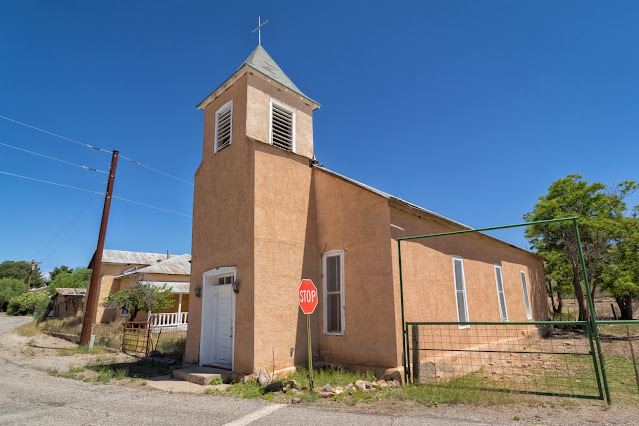 There were half a dozen more churches on the tour, but three of them I had photographed previously, and I knew they were best photographed in morning light, not afternoon.  In addition, my traveling companion, Alan, and I were "shot out" (meaning we were out of enthusiasm for photographing anything!), so after a delicious lunch of green chile cheeseburgers at the Buckhorn Cafe in San Antonio, NM, we headed for home.  We'll shoot those other churches another time.