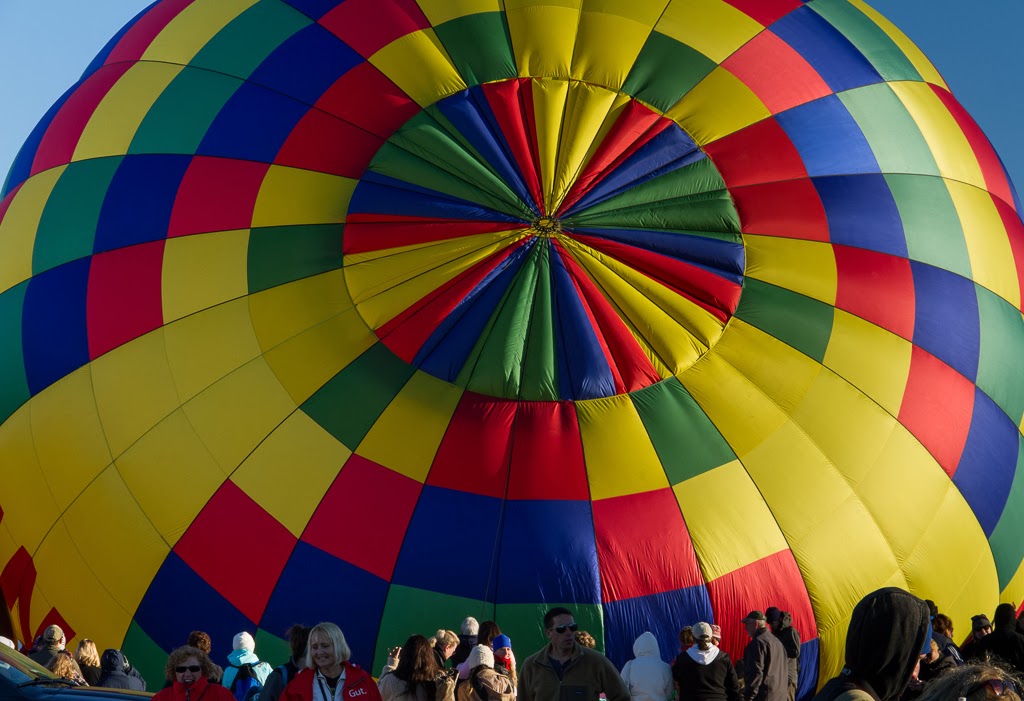 This was the final weekend of the 2013 Albuquerque International Balloon Fiesta -- probably the premier hot-air ballooning event in the world.  Roughly 500 balloons from 19 countries participated this year.

I got two photo opportunities this year -- one at the launch site yesterday (Oct. 12), the other by just stepping outside our house this morning.

Saturday I went down to the launch field, where about 100,000 spectators gather in the cold and dark to mingle with the balloons before 6:00am.  (How many sporting events do you know that would draw that kind of crowd at that hour??)

The sky was clear, but the winds were at the limit of acceptability (7-8 mph), so only about half of the balloons actually launched.

As usual, the day began with Dawn Patrol -- a few balloons that launch about an hour before sunrise to confirm the wind directions at various altitudes. 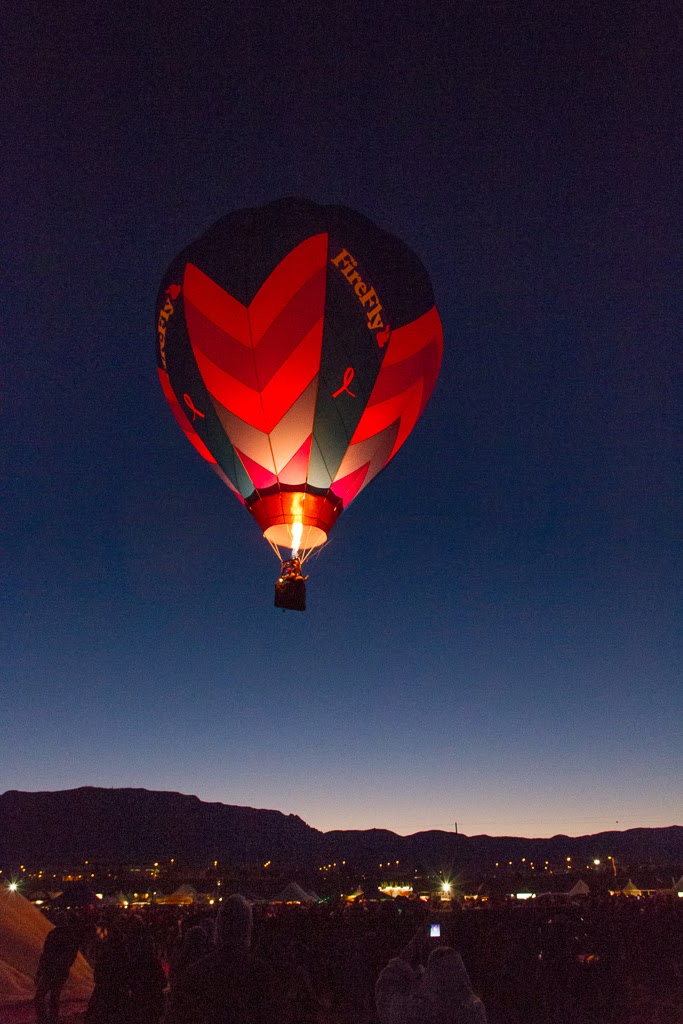 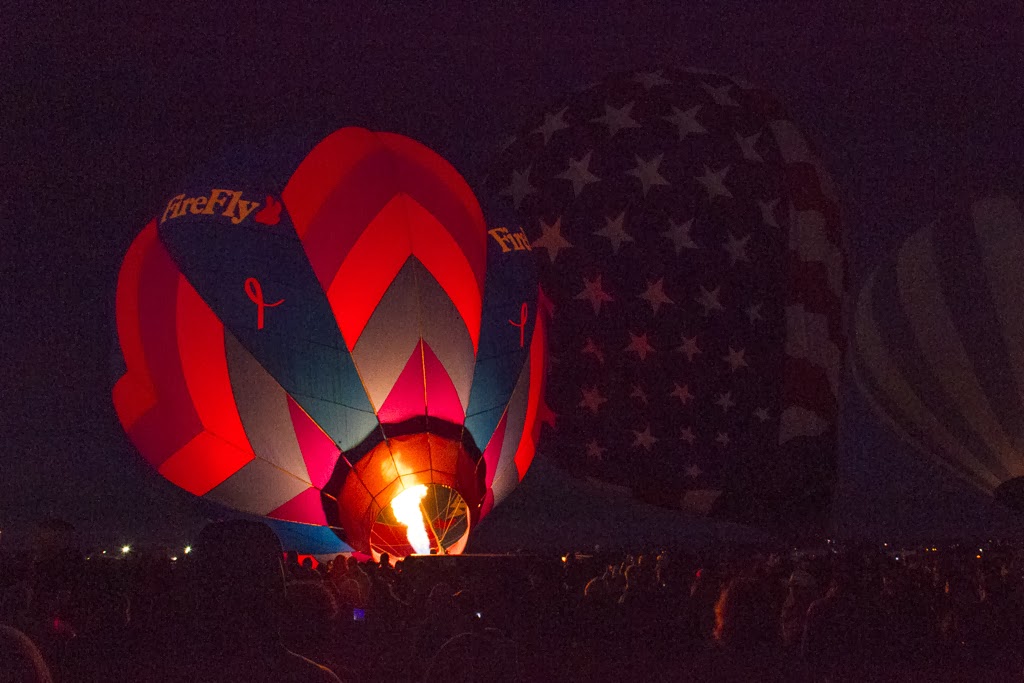 Once the green flag is raised, there is an organized sequence of preparation and launches.

The balloons are laid out on the ground and initially inflated with large fans powered by small generators, so it's really noisy out on the field.  Then, when the balloon is ready, the pilots fire up the propane burners at the open end of the balloon.  Here's a photo . . . 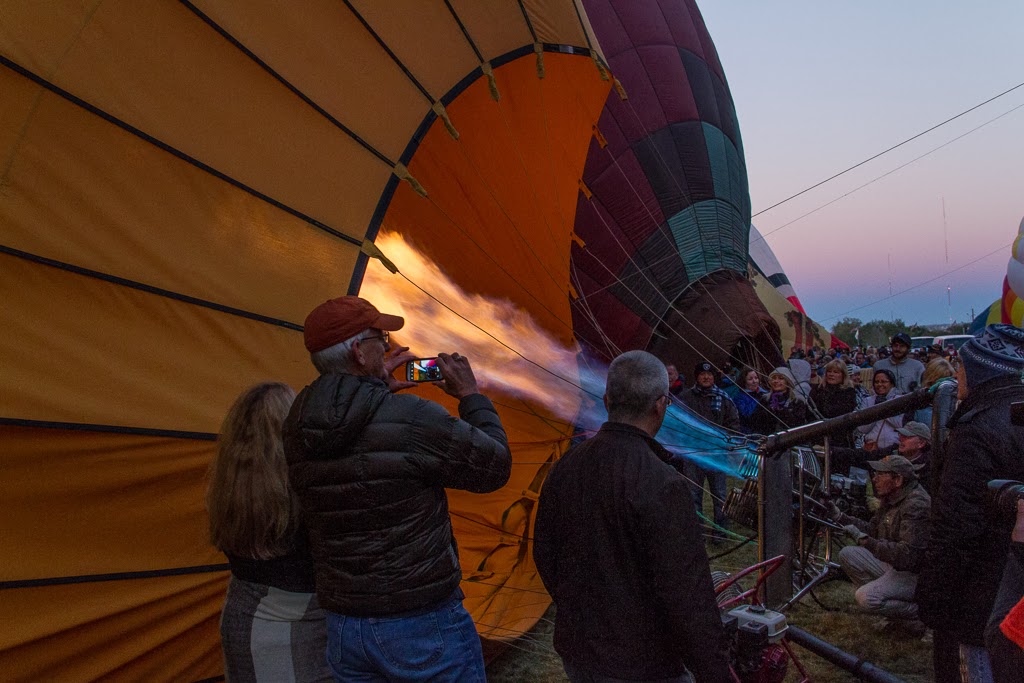 . . . and a video below.  (If the video takes you away from this page, I apologize; please use your "back" arrow to return to this blog.  I'm still not sure how to embed the video so it plays within the blog.)

While hot air fills the balloon, the crew holds it down until it is ready to "stand up" (but not launch). 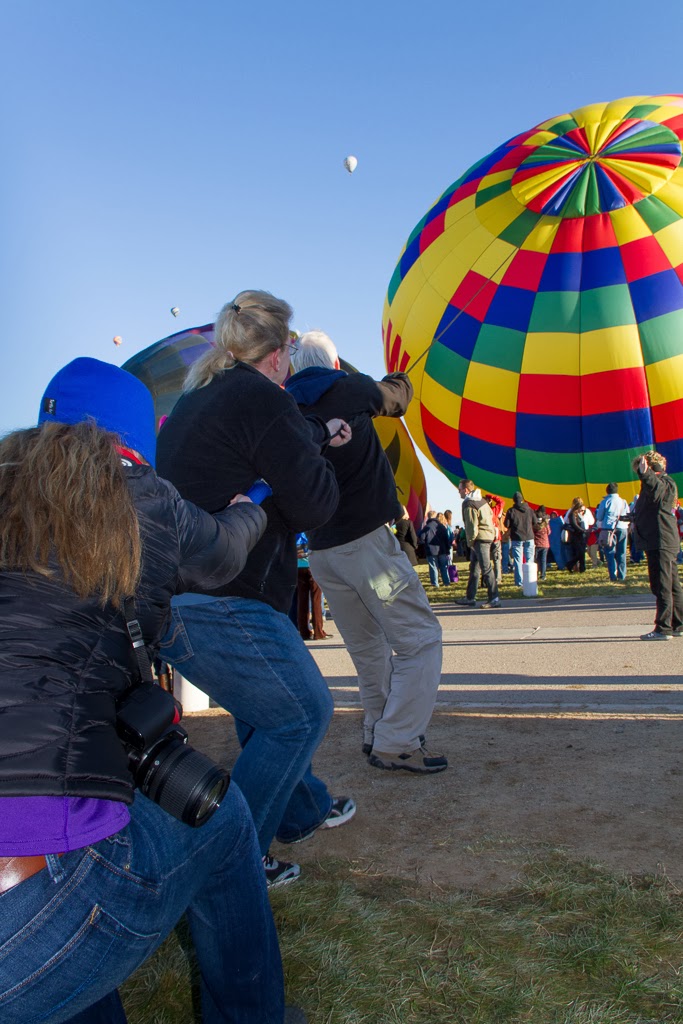 Once the balloons "stand up" they must wait for permission to launch.  With 500 balloons -- or even 250 -- it can get pretty crowded up there, so they have launch directors dressed up like NFL referees (and lovingly called "zebras") to direct traffic. 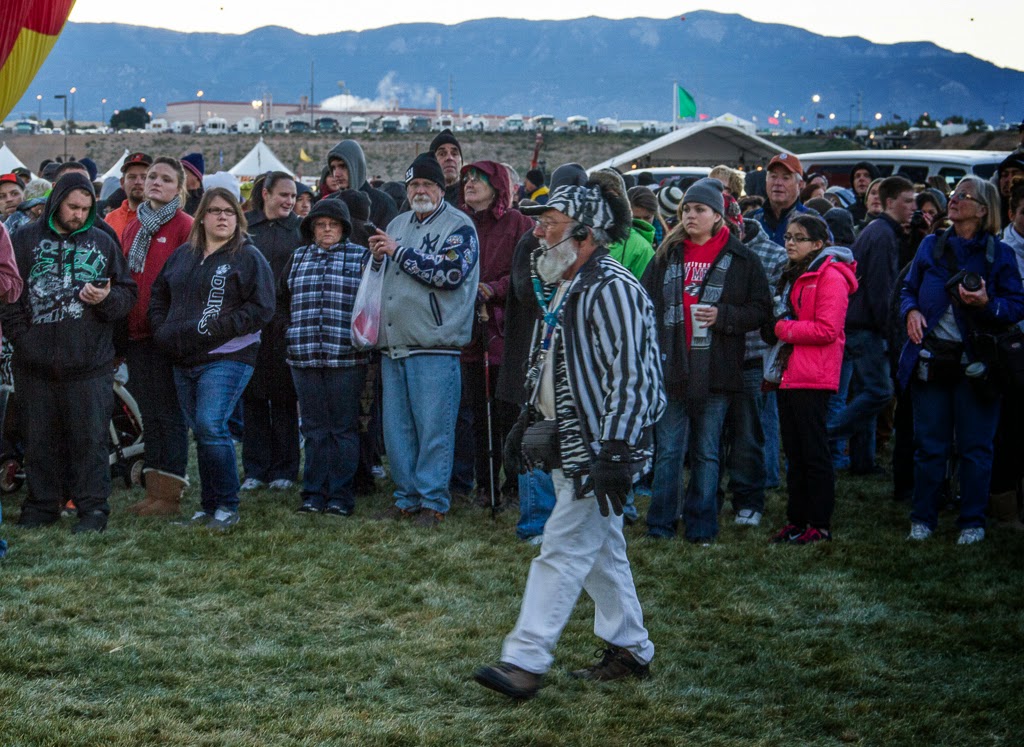 The zebras clear out a downwind area about 30 yards long as a runway for the balloon to lift off.  When they launch, the crowds cheer and the passengers wave goodbye.  Here's a video clip of a couple of launches.  (Again, if this takes you away from the blog, just hit your "back" arrow to return after the video plays.)

On Saturday, first up after the Dawn Patrol were the commercial operators, with huge balloons that take 8-10 people in very large gondolas.  This is their big money-making time, so they will fly when others might not.  Then the sky begins to fill with balloons: 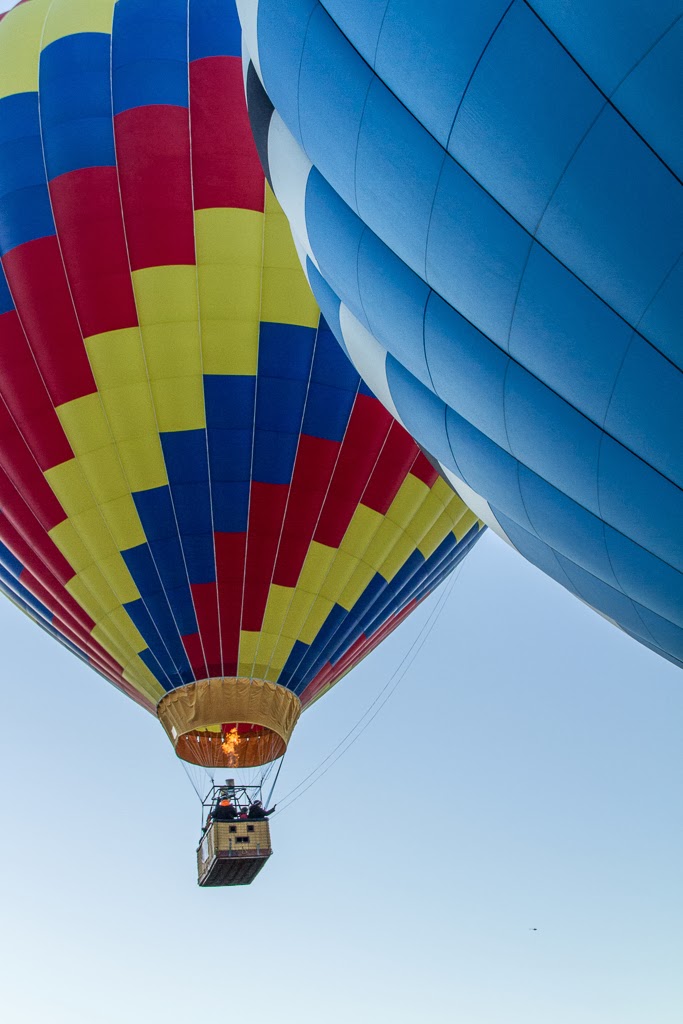 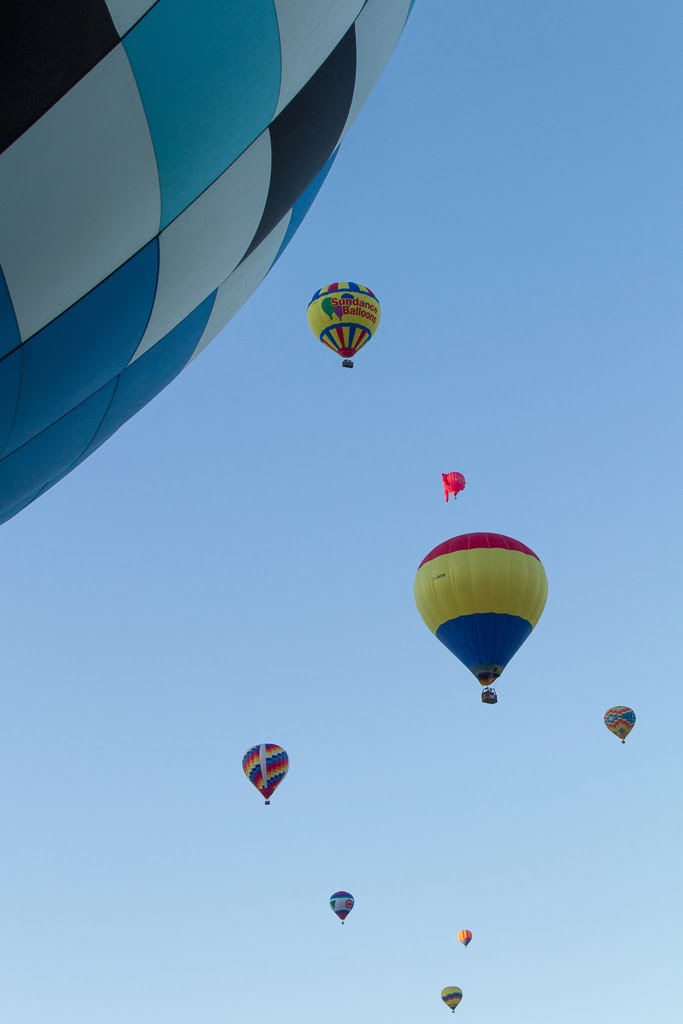 Many balloons carry advertising messages, but one was unique: 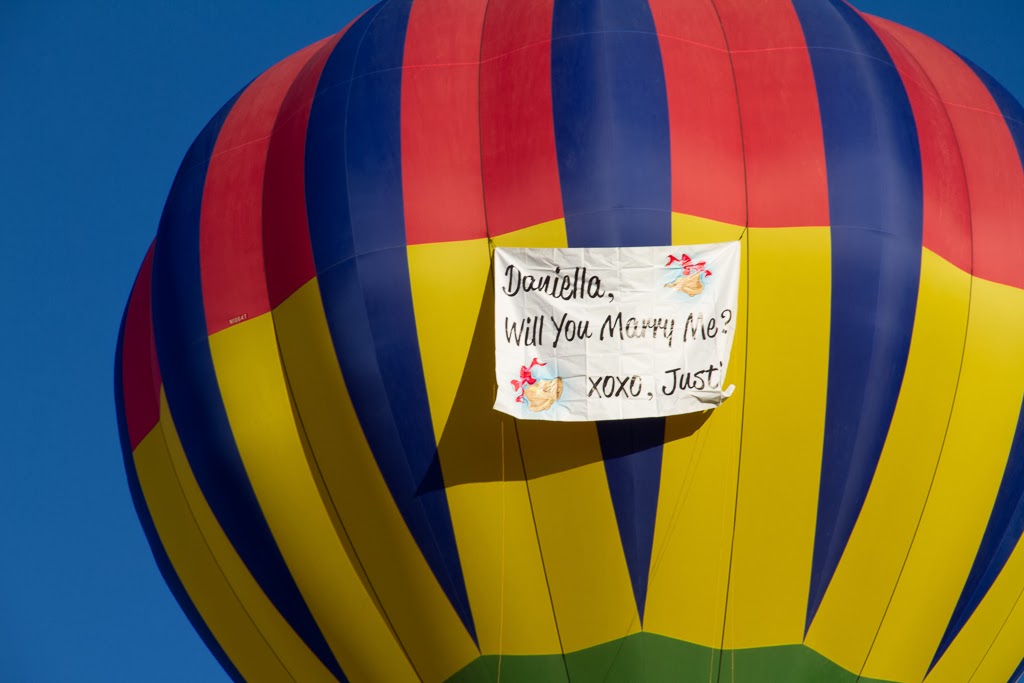 As they fly overhead, they sometimes look like beautiful marbles against a brilliant blue sky: 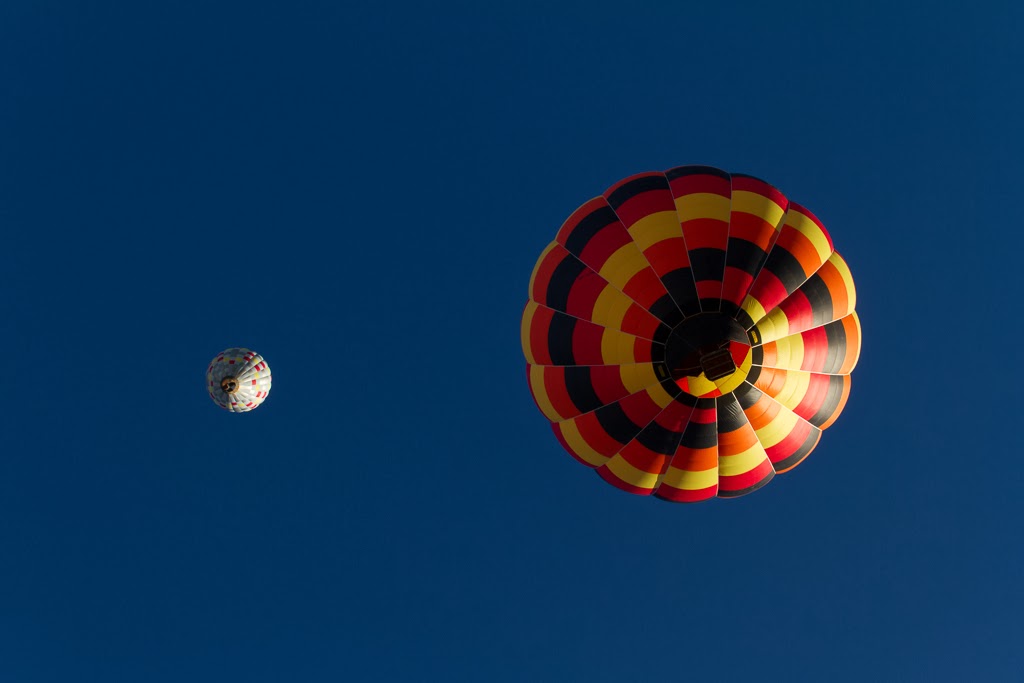 Saturday the winds on the field were strong enough to blow balloons horizontal while still tethered: 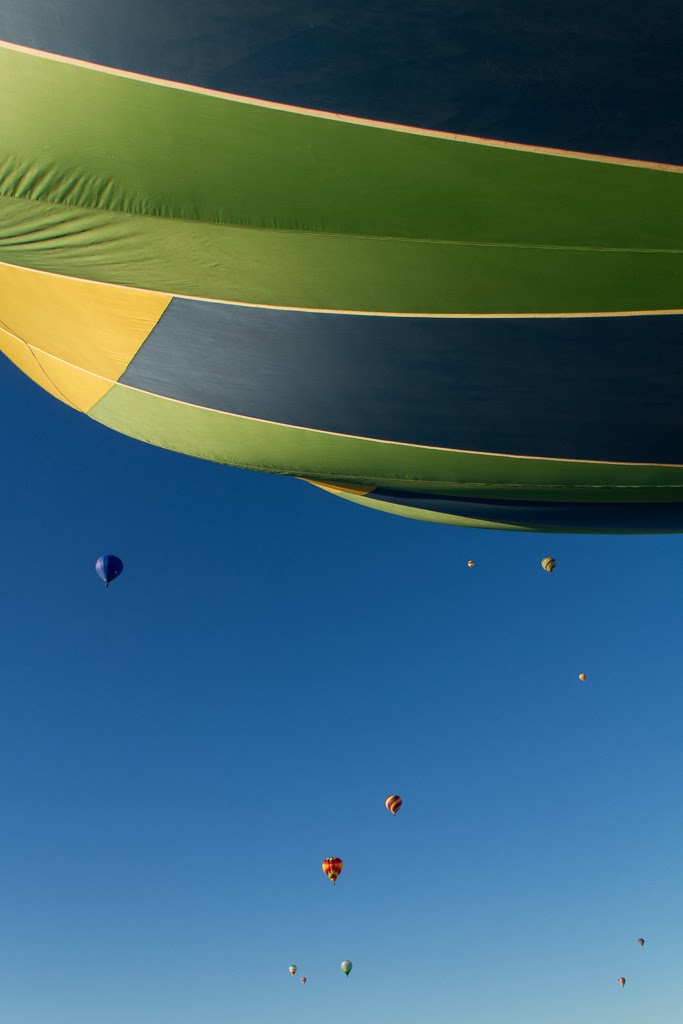 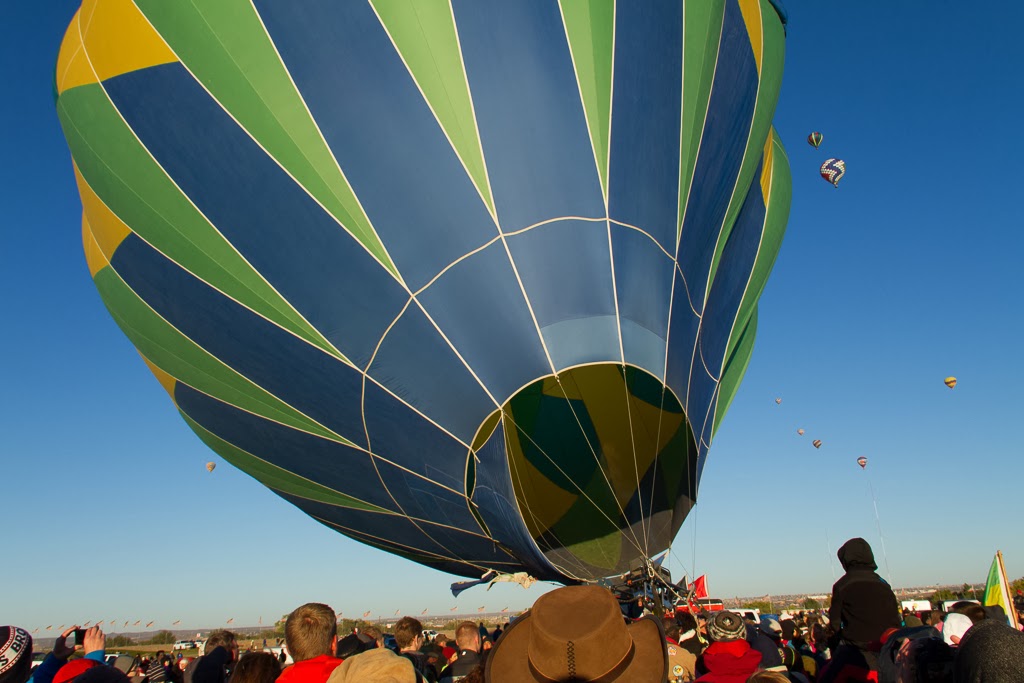 After launch, the balloons fly with the wind that takes them away from the field, and then it's up to the pilot to fly and land safely.  (More about landings below.)

Sunday morning's launch conditions were better than Saturday's.  The winds aloft were from the southeast.  We live about 6 miles (as the crow  -- or balloon -- flies) northwest of the launch field, and when we stepped outside, here's what we saw coming our way: 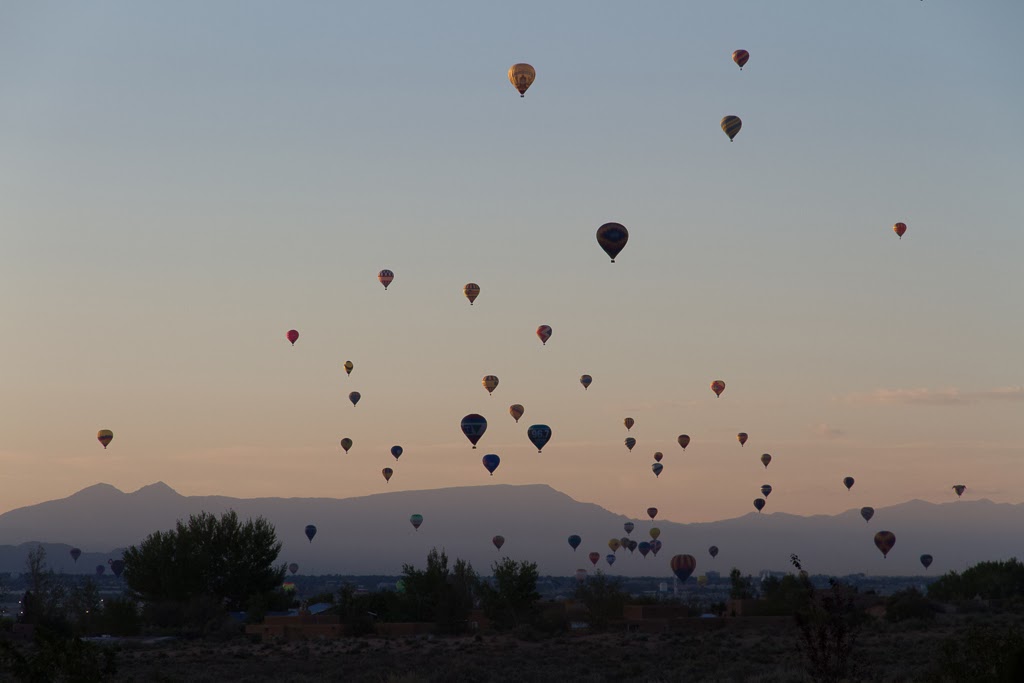 Eventually, many balloons drifted over our neighborhood: 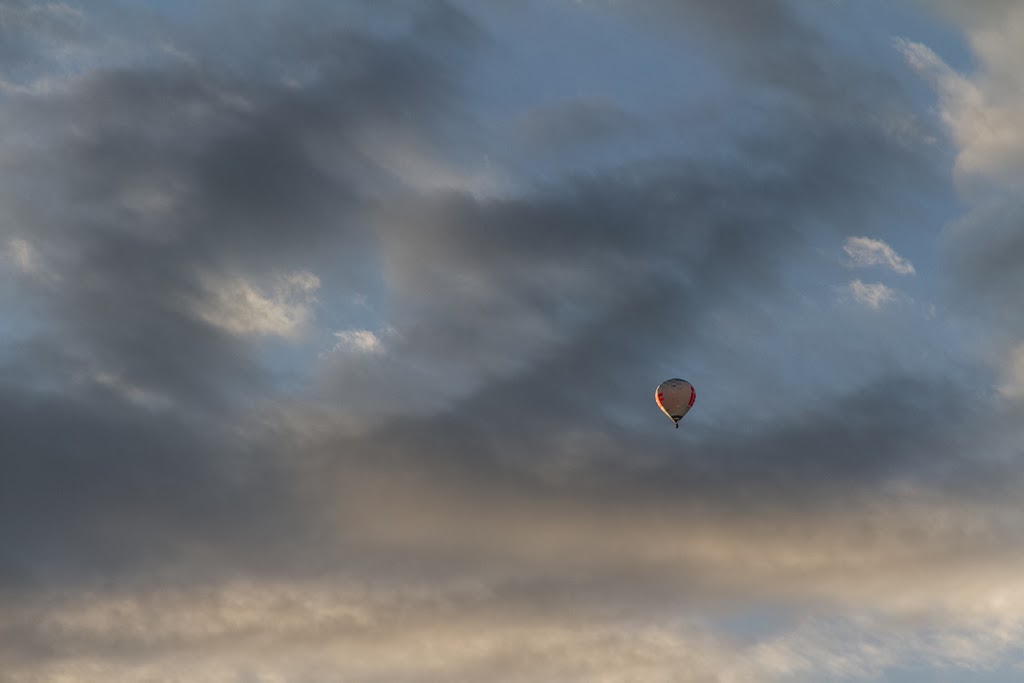 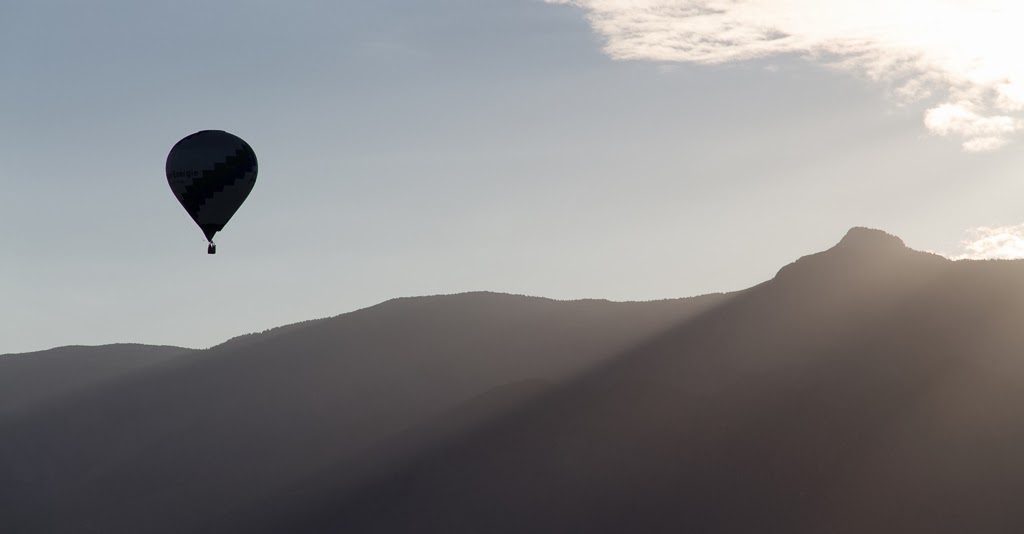 After about an hour, the balloons started looking for places to land.  Although the upper level winds were from the southeast, the winds on the ground at our house were from the northwest (180 degrees different).  So to land, many of the balloons would overfly the house, then drop down and come back to land in a large open space about 1/4 mile south of our house.

Here's a balloon coming in from the north.  If you look carefully, you'll see a couple of other balloons in the distance lining up for descent, just like at an airport.  (BTW, that's not our house in the picture.) 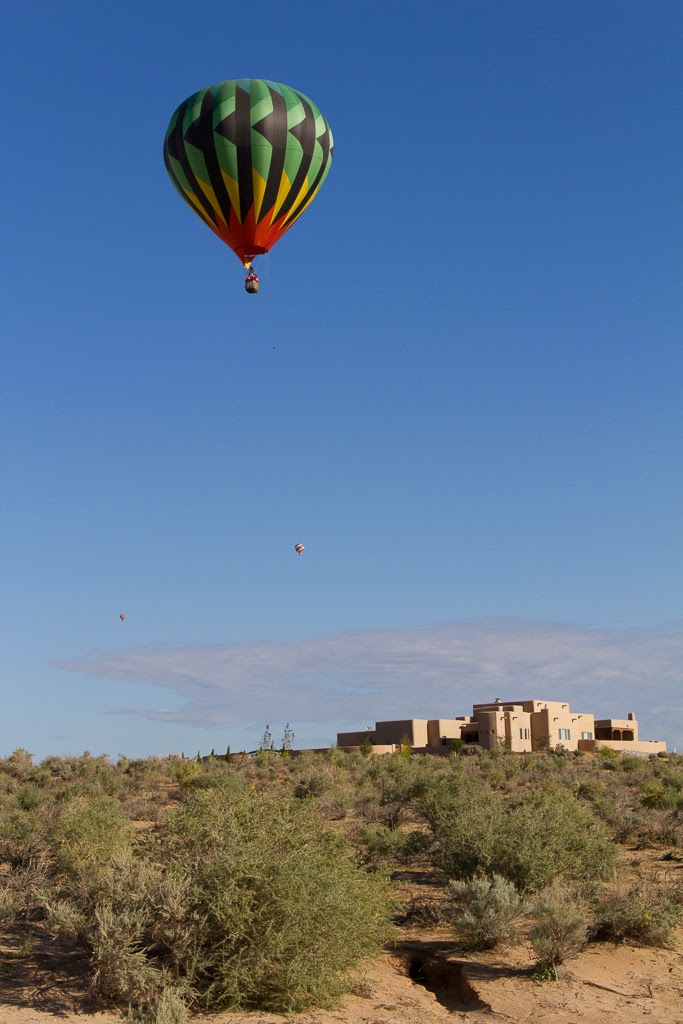 Now looking west, here's the balloon as it flies over our house and drops toward the landing area: 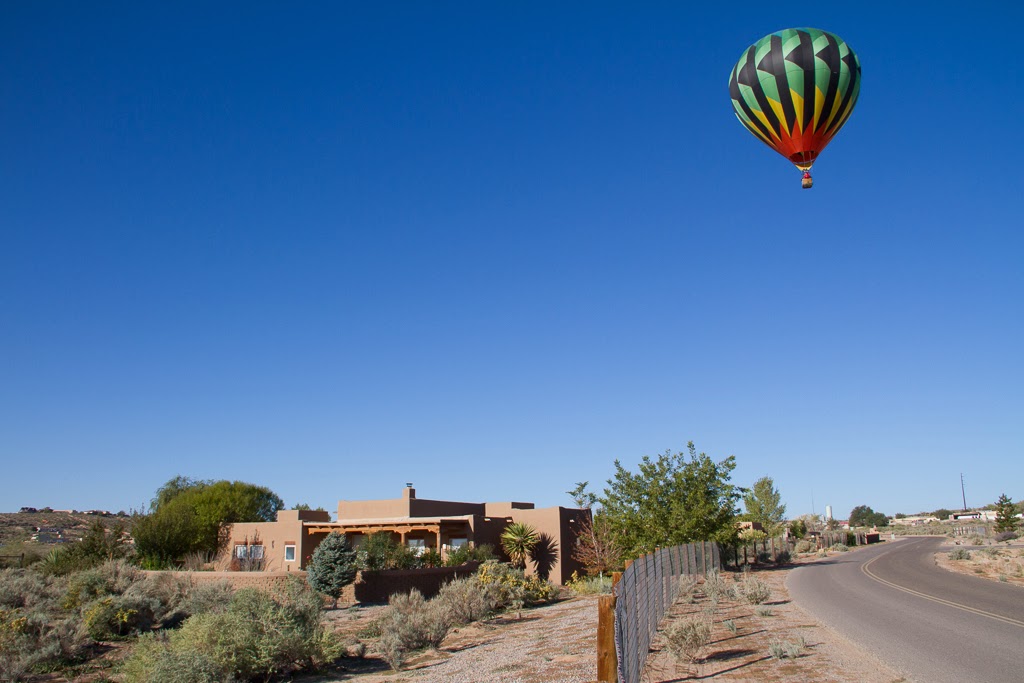 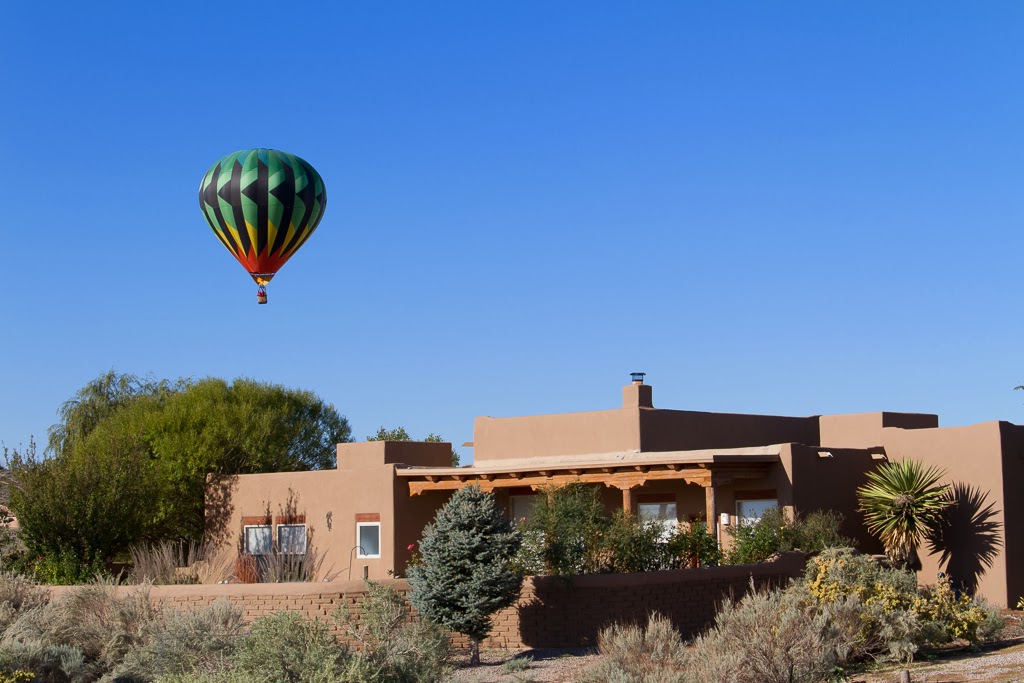 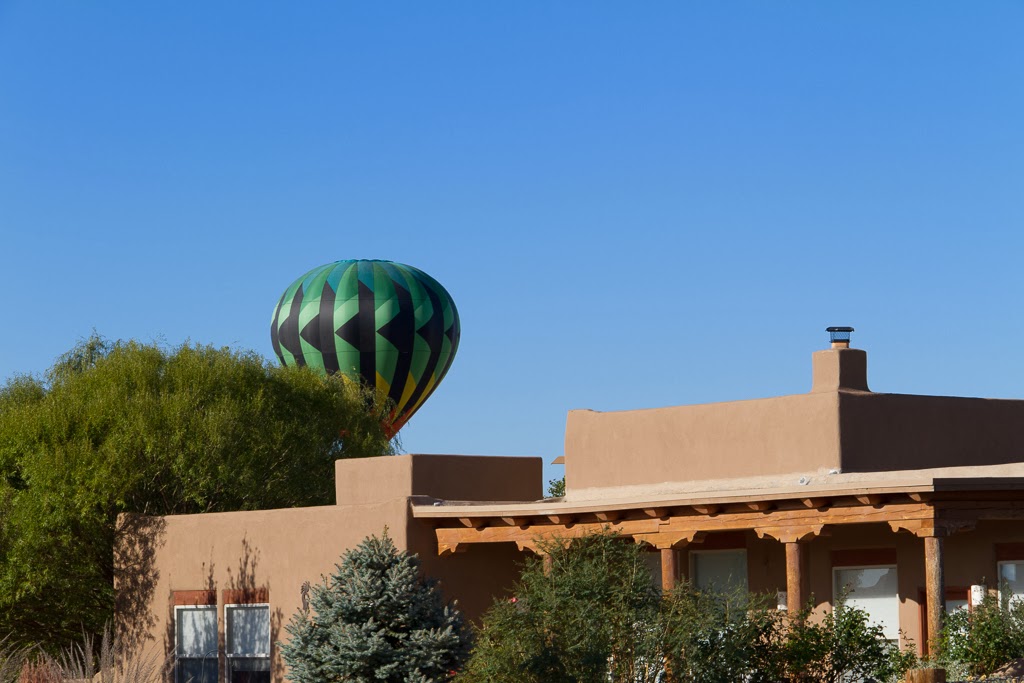 From the other direction -- looking east toward the Sandia Mountains -- here's what a landing looks like: 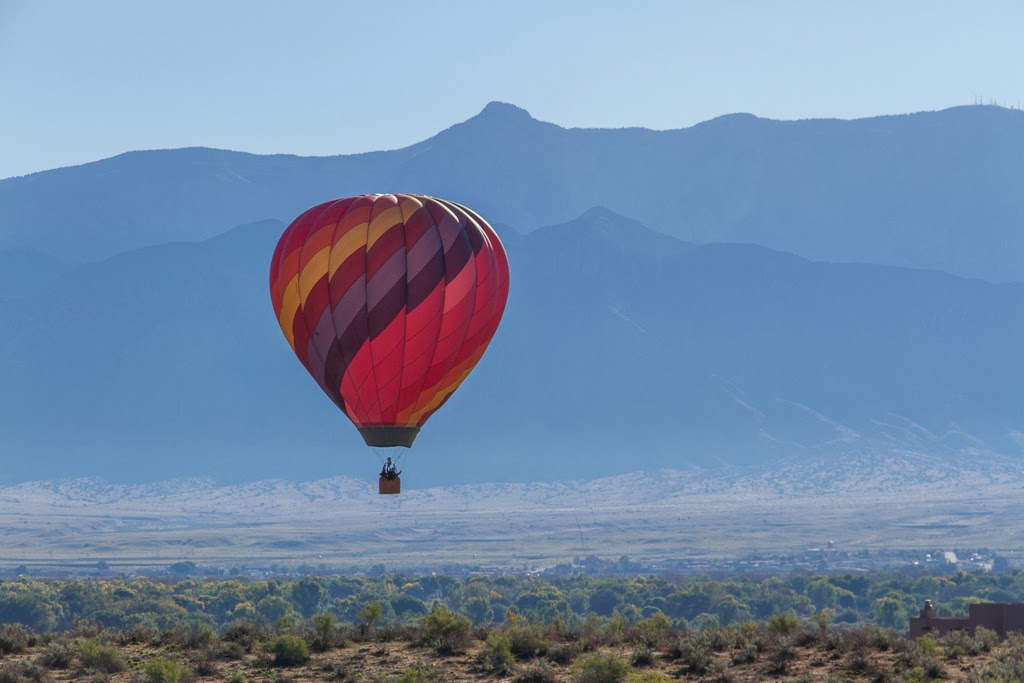 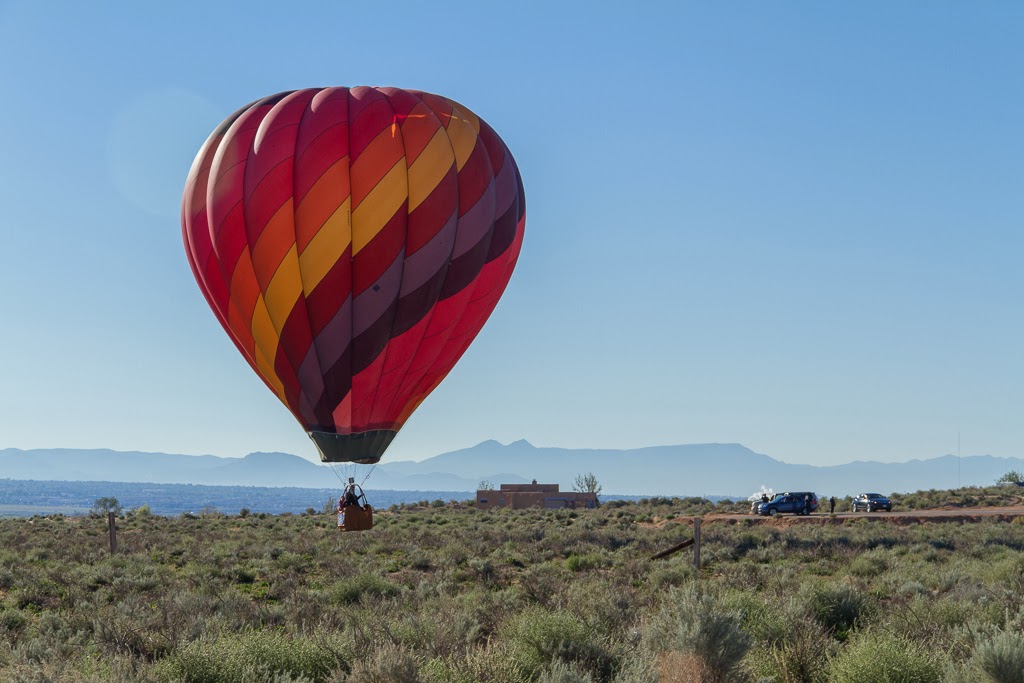 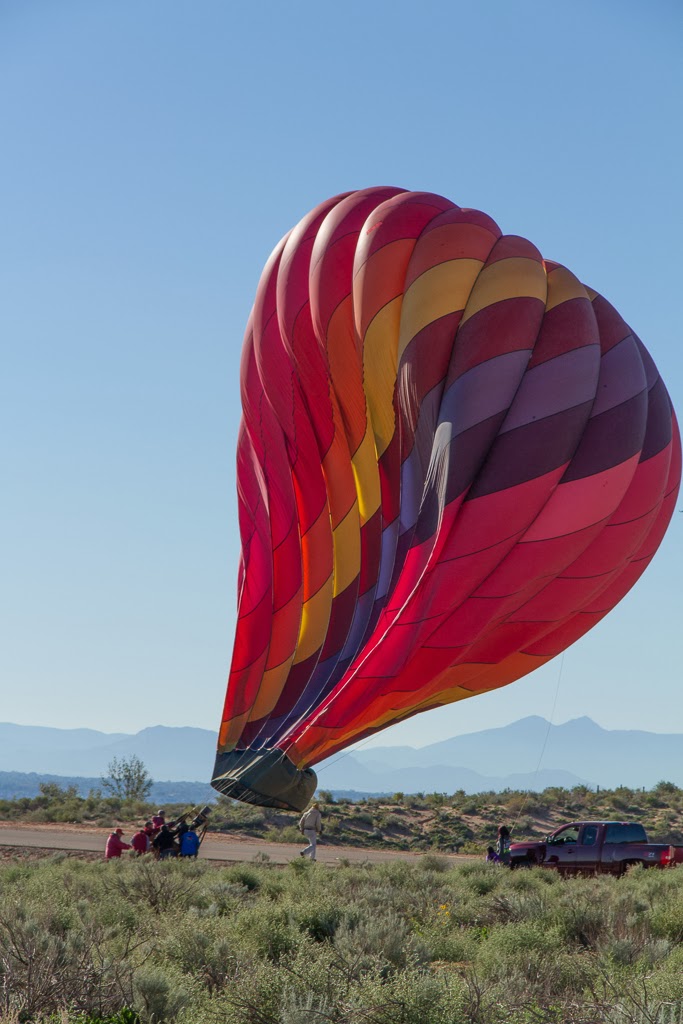 Once on the ground, the passengers and pilot have to pull down the balloon.  But in this case, because many balloons were using this area as a landing zone, there were multiple chase crews already on the scene to help them corral the balloon. 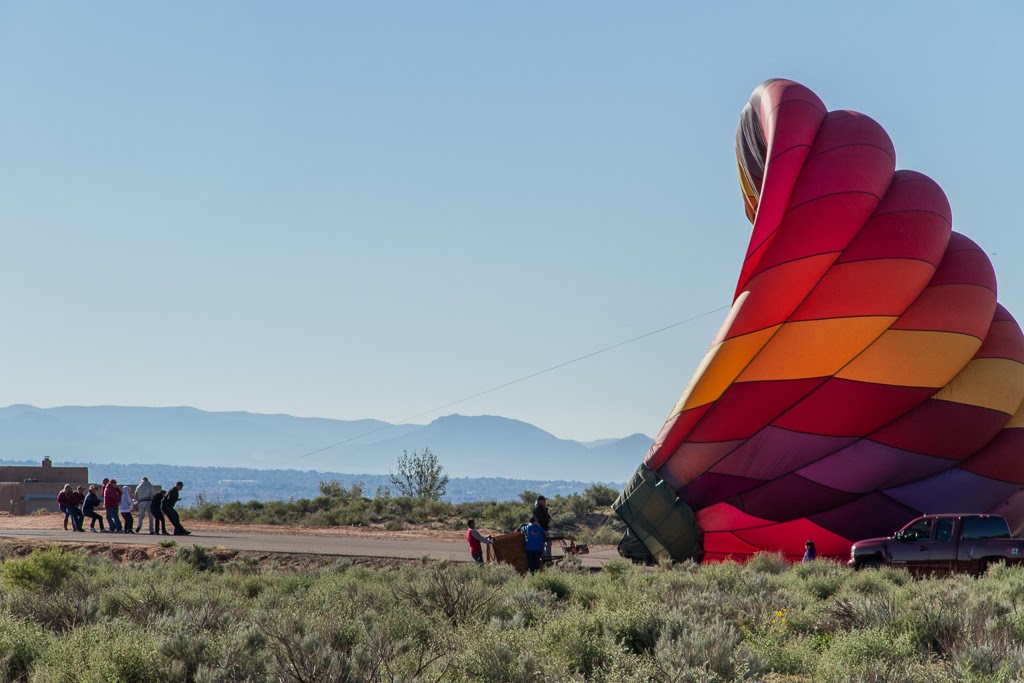 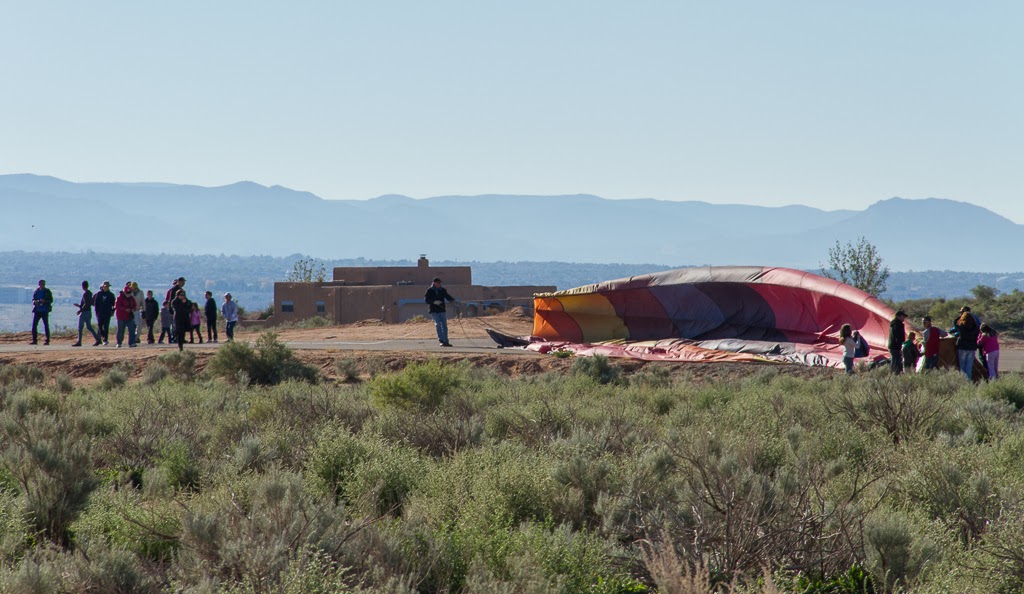 A safe and happy ending to a great ride and another wonderful Balloon Fiesta!

If you would like to see these images (and more) in a larger format, you can go to my website -- Todos Juntos Photography -- by clicking here.